“…Dr. [Margaret] Pfanstiehl…said her goal was to engage the sight-deprived to‘live a 20/20 existence without 20/20 vision.’”

From where I sit on my $5,000 power chair, two issues come to mind immediately. First, President Obama, the man I supported to be president, plans to reduce the Medicare budget by nearly half a trillion dollars. These cuts, intended to help pay for health care reform, have come on top of procedures that hurt me and others who are elderly or disabled. The argument is that current and future cuts will reduce “fraud
and abuse.” Attorney General Eric H. Holder, Jr.’s fraud and abuse prosecutions are notable for their relative insignificance.

The second issue that comes to mind is when elderly and disabled voters are organized,
they constitute an effective voting bloc. As I write this column in Addison Court in State College, I note that Addison Court has about 90 residents who are 55 or older or who have disabilities or impairments.

When George Bush was president, he attacked Medicare, creating barriers that
made it more difficult for eligible citizens to obtain medical oxygen for homecare,
wheelchairs, power chairs and scooters.

To take me as an example, in March 2008 a power chair was prescribed for me after (in-patient
hospitalization at Health South). I received a thorough evaluation from physical and
occupational therapy. My physician, Dr Colin McCaul, a specialist in rehabilitation,
prescribed the chair because he said it would be useful for me to have more support
for my right arm, helping to avoid surgery.

It would also be useful teaching my left arm how to perform functions previously
done by my right. The chair’s controls are on my left causing much trouble
before I finally learned how to drive lefthanded.

Medicare required that I go through an hour-and-a-half test with a rehabilitation
specialist. After passing the test, I saw Dr. McCaul in the hallway. The rehabilitation specialist
emphasized the importance of the doctor scheduling a one-on-one appointment devoted strictly to why I need a power chair and to be followed by a paper prescription with the magic words on top “after a one-on-one appointment.”
Since I had seen Dr. McCaul immediately before the test, he said it wasn’t necessary
to meet again. He would take care of it.  Medicare, which has been consistently negligent in explaining the rules to physicians rejected the prescription and would not pay. The prescription was not written in keeping with Medicare regulations. [How I obtained payment from an agency other than Medicare
is a story for another time.]

When Obama became president I thought he would reverse those policies. He has
made things worse. Especially distressing is that while Obama has been busy with health
care reform in which Medicare was a significant factor, he had not named a director of
Medicare, the largest health insurance company in the United States. Assistive technology
(which gets me from bed to the bathroom reliably) generally helps the disabled
avoid assistive living (which costs Medicare more than $40,000 extra per person
per year than independent living. Also, independent living
allows a greater sense of independence and helping to improve morale.

I said in my last column that I would discuss John Wayne’s comment that after
cancer surgery he did not feel sorry forhimself, despite the temptation. Wayne
proved it by getting back to work, filming a movie only two weeks after surgery.
For those of us who are disabled, not feeling sorry means having the equipment to
get a job, equipment suc as that listed above.

Assistive technology for the blind especially have resulted in
very exciting developments Disgracefully, technology that is very
useful to help individuals who are blind gain indepence
is not paid by Medicare. We also need technology for those who cannot
hear—only some of which is paid for, including controversial cochlear implants.

The most effective message to the Democratic Party is the creation of a bloc
within the party that will vote strictly on disability and aged concerns—a bloc which
will flirt with the Republicans if it does any good. [It should go without saying that this
bloc would include disabled veterans, but all too often veterans are neglected even
when intentions are best.]

—Joel Solkoff, author of “The Politics of
Food.” Contact him at [email protected] 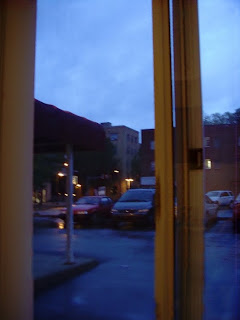 Picture 1. It is nearly dawn here at my apartment in Addison Court.

Lately, I have been getting up early, drinking 5 cups of Ethiopian coffee and so ending my caffeine for the day. Buzzzzzzzzzzzzzzzzzzzzzzzz. Pictured here is the view from my kitchen/dining room/living room window. I look out East onto the parking lot and the “urban” scene of Beaver Avenue in downtown State College. 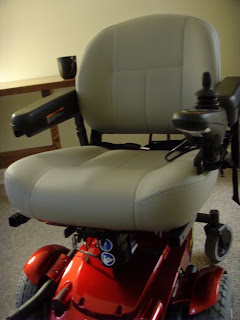 Picture 2. This is my new power chair; it arrived yesterday.

What you are seeing is the Jazzy Select 6 Ultra chair made by Pride Mobility Products Corporation. It cost over $5,000 and was paid for by the Office of Vocational Rehabilitation (OVR) here in the Commonwealth of Pennsylvania. 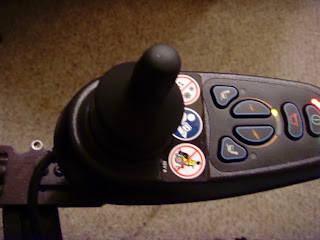 Picture 3. This is the joy stick, mounted at my request on the left side.

Since I am right handed mounting the joy stick on the left leaves me with the motor skills equivalent to signing my name with my left hand. (Lots of luck.) My idea, in keeping with the principles of occupational therapy, was to spare my right hand (and more importantly my right arm) unnecessary strain. The result is that I bump into walls, door sills, and furniture. Yesterday, before putting the thing away for the night, I turned the large living room table completely around.

To the far right of the joy stick, just barely visible, is a half moon showing that the power chair is full of electricity. The on-off button is to the left of that, then the horn, then the speed, the button on the top decreases the speed. Notice that the one light means I cannot go any slower. With practice, I can make the thing crawl. With proficiency it will go over 10 miles an hour, a seat belt protecting me against the world.

The two buttons to the far left control the elevator function. I can go up. I can come down. 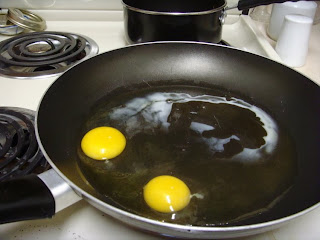 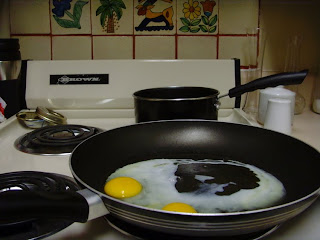 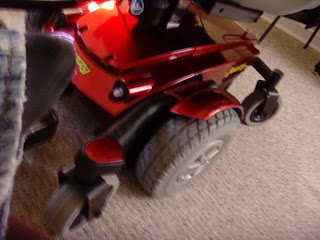 You will note that there are three wheels on each side. If I go forward all six wheels go in the same direction. If I go back, the toggle wheels (at the front and rear of the machine) turn around to go back. When they turn, there is a moment when I am not going straight back. Instead, I swerve and the way I am supposed to correct the swerve is by continuing to move back and correct the swerve.

Only walls and doorways get in the way. Instead of correcting by going back, I go forward, causing the wheels to turn around forward. After one of two maneuvers, I am in the corner of the room, unable to move in any direction.

Fortunately, about 62 percent of the time, I can make a sharp u-turn. Turning around in circles is easy and a lot of fun.

As I learned from yesterday, I am not yet ready to go outside. Practice is how to get to Carnegie Hall. Practice.