You are here: Home / Digressions / Countdown over: Amelia’s graduation ceremony was very wet; may end with my joining the Smyth County Moose Lodge 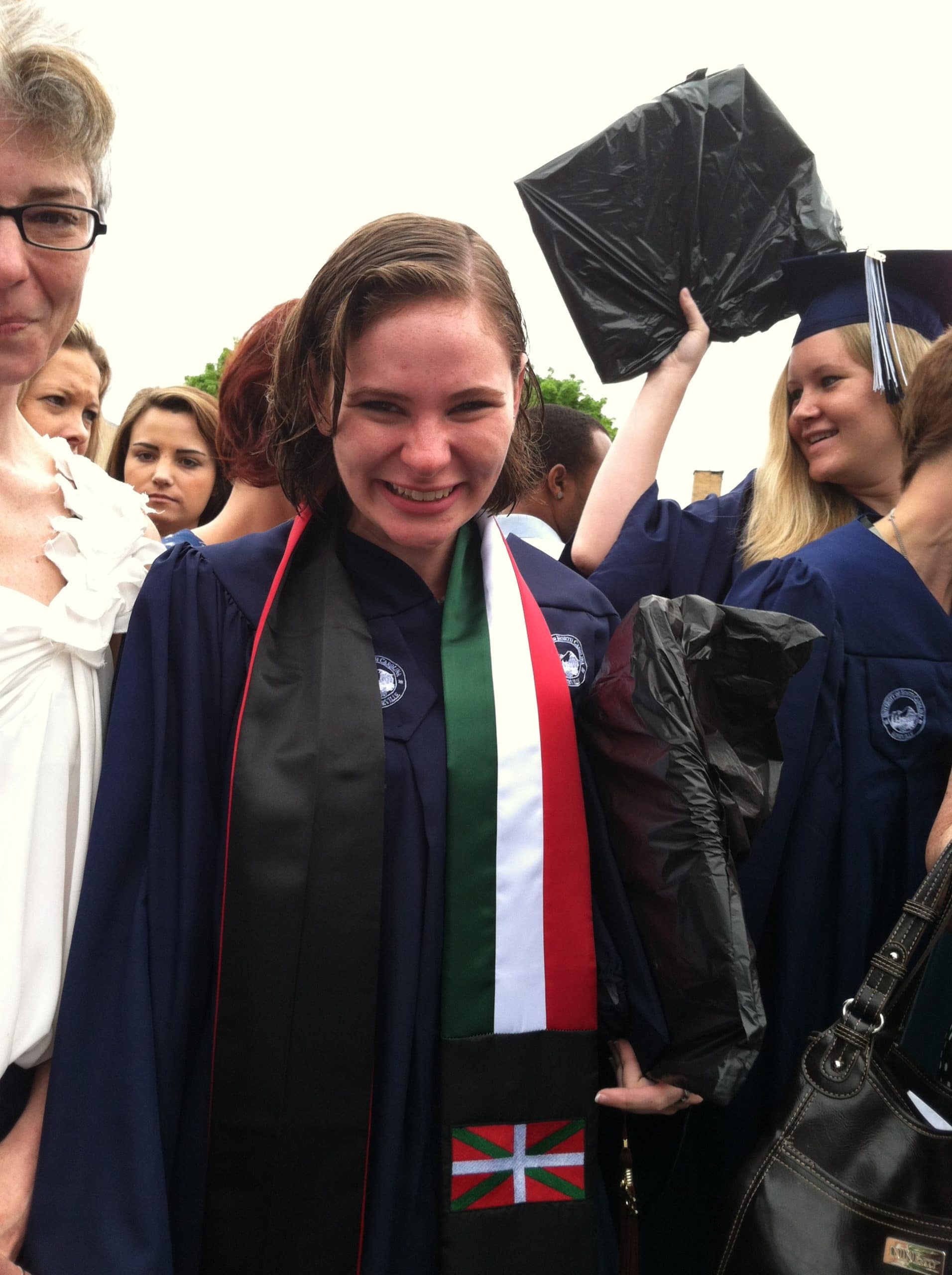 “Bowles served as President Clinton’s top assistant and was tapped by President Barack Obama to tackle the nation’s budget woes. He also spent five years as president of the UNC System.”

Our daughter Joanna Marie Solkoff, who graduated with honors in English from the University of North Carolina at Chapel Hill. She is currently studying to be a nurse. Accompanying Joanna is Jade Phillips, a rock and refuge shown together at my apartment at State College, PA in March:

Sarah is my sister (https://www.artnews.com/author/sarahschmerler/). Robert Simonson is my brother-in-law (http://www.amazon.com/Robert-Simonson/e/B001K8HFEA/ref=sr_tc_2_rm?qid=1337188291&sr=1-2-ent). Asher Benvenuto Simonson is my camera-shy only nephew; he is nearly 11.

I am ensconced in a disability room at the Asheville NC Extended Stay America motel.

This is directly down the road from the University of North Carolina Campus where Amelia graduates tomorrow at 9 AM.

Relatives, loved ones, friends, and the like are preparing to come to my hotel to engage in a Jewish celebration of Sabboth and undoubtedly much mischief.

When I have time, I promise to TELL ALL. Including photos.

There is candle lighting in my room: “Blessed are You, LORD, our God, King of the universe, Who has kept us alive, sustained us, and enabled us to reach this season.”

Michelle is my candidate for Best Western employee of the year.

As we all know, commencement is not a beginning, it is an end.

On the road again:

The route from Downtown State College, where I live, to Ashville North Carolina, where Amelia will be receiving her diploma on May 5th at 9 AM at the University of North Carolina in Asheville is 571 miles–a 9 hour and 40 minute drive, longer than I have driven in over eight years.

Yesterday, I left State College after my friend Pinki Heyn helped load the Enterprise Rental Car driven by Dawn, a new management trainee, who brought me to the rental office for the ritual filling out of the forms and paying the money. After picking up a suit (which I have not worn in 7 years), several starched shirts, and clean clothing, I left town at 5 PM and drove the astonishingly beautiful Route 99 to Route 70 to Hagerstown, site of the Battle of Antietam, the first Union victory, giving  President Lincoln the credibility required to issue the Emancipation proclamation. More on Emancipation later in the trip.

I now have traveled 158 miles of a 571 mile trip. Amelia called anxiously trying to rush me. Whose celebration does she think this is?

Last year, before reaching her current level of maturity, Amelia prepares to run with the bulls

A Commencement Speech I Approve Of

The point is we don’t want you out here very much. We on the outside see graduation as a terrible event–the opening of an enormous dovecote from which spring into the air tens of thousands of graduates. What is particularly disturbing is that you all come out at the same time—June—hordes, with your dark graduation cloaks darkening the earth. Why is it that you can’t be squeezed out one at a time, like peach pits, so that the society can absorb you without feeling suffocated?

My own profession is being, swamped with writers coming, out of college, despite the conditions out here that no one reads. Indeed, my friend Kurt Vonnegut was saying the other day that the only solution to ·the moribund state of publishing would be to require all of those on welfare that before receiving their welfare checks, they must hand in a book report.

So go back to your dorm rooms and stay. True, there may be some practical problem. The deans may come tapping at your door like hotel concierges wondering about checkout time. Tell the dean through the door that you don’t think you should go out into the world with a C- in Economics 10. Great damage can be caused to the economic structure, and probably already has, by Harvard men out there who earned a C– in Economics 10; you must tell the dean you don’t want to compound such a situation.

The dean will say that he needs the room for the junior who is going to become a senior–the process must go on. Tell him there’s no reason why the juniors can’t stay juniors, the sophomores, sophomores, and the freshmen, freshmen. Tell him to stop the process. Why should the process go on? The Harvard Lampoon has had, in its century of operation, 100 different editorial boards. Has it improved? Probably not. Why not keep the same one?

Besides, we are told all the time what a marvelous institution Harvard is. Benjamin DeMott once likened Harvard to the continent of Europe: “Either you’ve been there or you haven’t,” And you’ll all remember the Boston dowager who said of a nephew: “He doesn’t go to college, he goes to Brown.” Why do they tell us such things if they don’t want us to stay? So tell them you’re convinced. You’ve decided to stay. You’re not going to budge.

After a while the dean will go away. Deans always go away. They go away to ponder things. They will assume that your parents will finally force the issue. They’ll want you home. But I am not so sure. I have the sense that parents would rather not know what’s being sent home to them these days from the college–not unlike receiving  a mysterious, package tied with hemp, addressed in rather queasy lettering from Dutch Gularia.

They’d much rather you stay here. When a mother is asked about her son at the country-club dance she can always say: “Why John’s off at Harvard.” There’s something quite grand about that certainly compared to: ”Well, the last time I saw him he was throwing a frisbee in the backyard.”

If your parents insist you pack up and come home, there are always measures. If you’re chemistry major, tell them that you’ve become very attached to something in a vat of formaldehyde. If you’re in pre-law, tell them that you’re thinking of bringing home a tort. Your parents will probably have forgotten what a tort is, if they ever knew, and it sounds so unpleasant–something that your Mom wouldn’t want to have stepping suddenly out of a hall closet. Surely, there is hardly an academic field of one’s choice which does not have a nightmare possibility with which to force one’s parents to pony up enough to allow nearly a decade of contemplation in one’s room.

You’ll remember the King in Alice in Wonderland. When asked: “Where shall I begin?” the King says, “Begin at the beginning and go on until you come to the end; then stop.” What I am suggesting is that you stop at the beginning, stop at your commencement. It’s not very interesting to stop at the end–l mean everyone does that. So stop now. Tell them you won’t go. Go back to your rooms. Unpack!

The party is over, but I linger on in Asheville after everybody left.

The graduation was on Saturday. On Saturday at 5:15 PM we had a celebratory dinner at a classy Spanish restaurant. Asheville becomes more charming every day. On Sunday morning, my sister Sarah Schmerler, her husband Uncle Robert Simonson, and my 10.5 year-old nephew Asher left to return to Brooklyn, NY. Also that morning I had breakfast with my former wife Diana Bass, my elder daughter Joanna and her friend Jade Phillips, and Amelia. Joanna and Jade left to the airport to fly to Los Angeles where Jade’s mother lives, before…Diana drives off to her home in Durham. Amelia lingers an extra day and morning and is now with her mother camping on the Outer Shores of NC. Wonderful ferry ride. wonderful world.

And I returned to the Extended Stay Hotel here in Asheville at Kenilworth Knoll where the helpful staff help me with my disability gadgets. Here is Extended Stay Wendy helping with a light-weight wheel chair I am experimenting with.

Somethings naturally come to an End. The countdown to Amelia’s graduation from college has come to an end. She graduated a week ago today. This posting is mostly over. Yes, there are details to be taken care of such as the deep skinny on Graduation Meal celebrations 1-4.

As I write this from Marion, VA still miles away from home at the Budget Inn (not affiliated with anything) across the tertiary road from the beautiful Walker Mountains, the details of the end have not been codified. Last night, for example, I was invited to join the Moose. Come next month’s check, I plan to join the Smyth County Moose chapter where I had friend okra for dinner last evening. My Moose card will get me in any Moose hall in the country.