You are here: Home / זאדיע / “Man I love how Redman tastes…Honey I love your love the most” 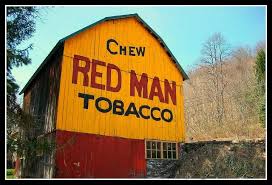 Man I love how Redman tastes

Any song sung by George Strait

is Country at its best

Damn I love my Nascar race

is country at it’s best

Yes I love good cold beer
And mustard on my fries

that rocks on Friday nights

And hell yes I love my truck

but I want you to know

Honey I love your love the most Wikipedia on Redman Chewing Tobacco: “First introduced in 1904. Red Man has traditionally come as leaf tobacco, in contrast to twist chewing tobacco or the ground tobacco used in snuff. It is made by the Pinkerton Tobacco company of Owensboro, Kentucky. In 1985, Pinkerton was acquired by a Swedish corporation, and after further corporate reshuffling,  is owned primarily by institutional investors. The proportion owned by non-Swedish investors is approximately 80%