You are here: Home / Disability and Elderly Issues / McKeesport is not as depressing as you might think: Special 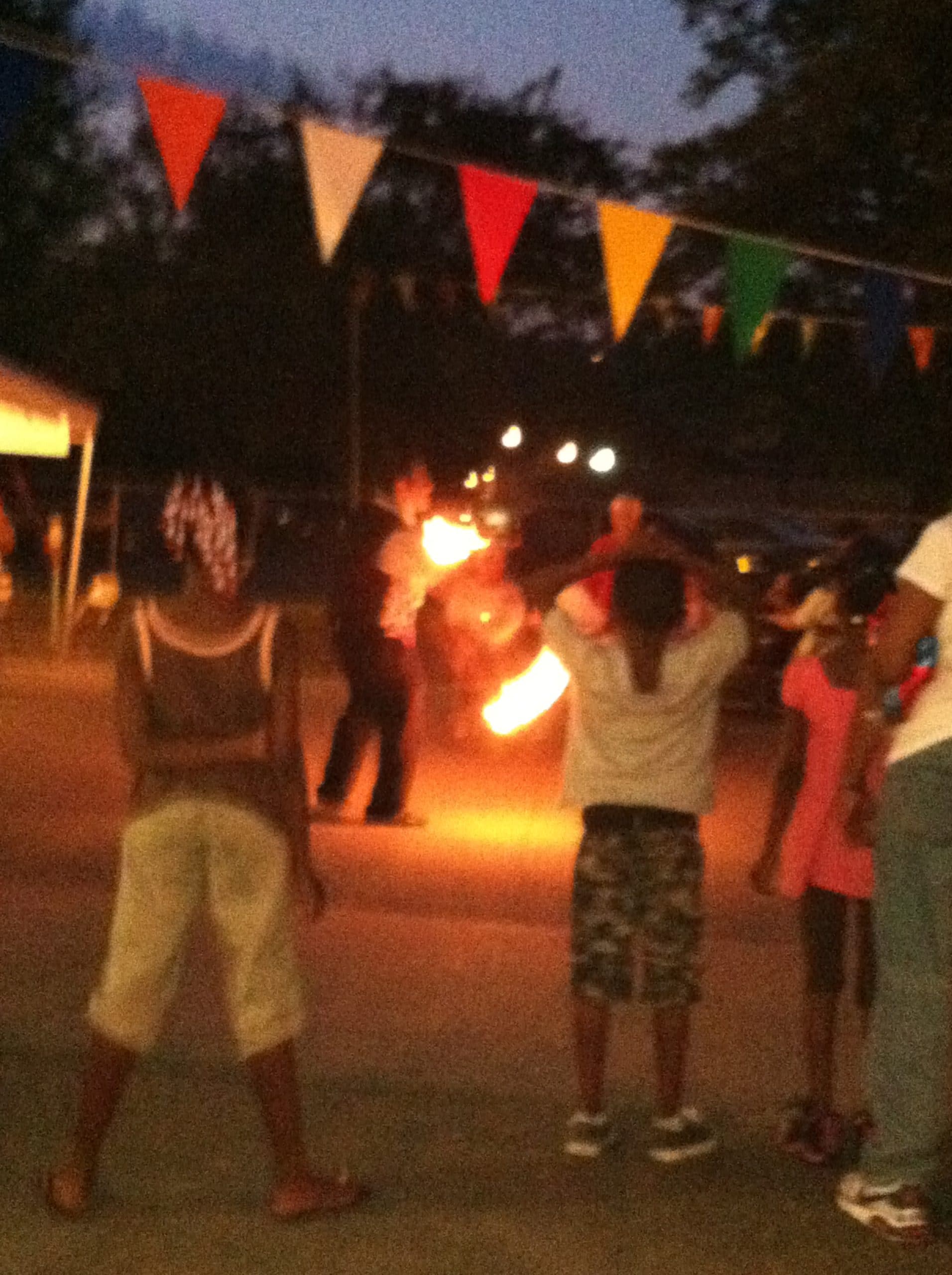 I realize not as depressing as you might think shouts out that McKeesport really is a depressing place. It is.

When I get around to it, I will describe the exceptions to depressing, such as this fire juggler whom I saw last night while I attended Corpus Christi, an annual Downtown McKeesport event two blocks from the Blueroof Experimental Cottage where I am entering this blog post on my laptop on the kitchen table.

If you are quick, you can see me now live on the Internet blogging away at Blueroof Technologies’ Experimental Cottage–do-gooders extraordinaire so aging in place can happen with dignity and independence for:

http://75.149.30.169:60001/CgiStart?page=Single&Language=0 [Only one view at a time: so take a metaphorical number and experience the enforced patience of becoming elderly or come back and click impulsively.]

I took the following photograph today of a side street (not that McKeesport’s Fifth Avenue is much better) to show what I mean by depressing:

In the six or so years that I have lived and traveled through the Rust Belt Of Pennsylvania, McKeesport is definitely the most depressing of Rust Belt depressing towns. McKeesport has been losing population steadily from its all time high in 1940 of 55,355 to the most current figures available– a mere 19,731 people according to the 2010 U.S. Census–an ongoing decline; this time 17 percent fewer people than 10 years ago.

McKeesport is 19 miles southeast of Pittsburgh.

See a START pin showing where I am now on Sunday morning July 1, 2012, 7:10 AM, getting ready to take a shower at the Blueroof Experimental Cottage, 400 Spring Street, McKeesport 15132.

Hope: The Mirriam-Webster Dictionary of the English Language (Copyright 2012) defines hope as: “expectation of fulfillment or success.”

McKeesport Hope 1. Best shower for the elderly and disabled. For me, as a 64-year-old man with a spinal cord injury who cannot walk: hope in McKeesport means being able to take the best shower (safest, most satisfying) that I have taken in the 18 years of being a paraplegic: a shower I can take without assistance from a health care aide, a shower that does not put me in danger of falling posing the risk (as my neighbors back at an independent living facility at State College which I call home face on a daily basic–a risk that all too often leads to an ambulance outside my window, a trip eventually leading to Centre Crest, a nursing home where at great government expense, my neighbors die in despair).  [I am generally a cheerful guy]

Here in McKeesport is the best shower for paraplegics in the world:

When I entered the bathroom to take a shower, the lights to the bathroom were not on. As the forward wheels of my scooter crossed the beam generated by this contraption co-founder Robert Walters installed:

the lights go on. [Let there be Light.]

Meanwhile, inside the shower a motion detector is making sure that I do not fall.

Here in the shower, a motion detector watches out for me. See it. It is on the top left of the bathroom door. It looks like this:

If I fall, the detector detects no motion. If I do not get up after a period of time programmed by an expert, the walls call 911 and my family.

Actually, the voice that makes the call is a voice synthesizer located on a shelf in the laboratory in the basement. The interns who installed it had a range of voices to choose from. They chose the surprisingly sexy voice whom ever afterward is known as Amy. I can just imagine my daughters Joanna and Amelia when the lascivious voice of Amy calls to inform them their father has just fallen in the shower.

McKeesport Hope 2. Fresh water fish are back in the Mon Monongahela River.

Now that the River is no longer polluted with the effluents caused by National Tube Company, once McKeesport’s largest employer, sadly missed because the unemployment rate here is in the double digits, fresh water fish have returned.

Signs for live fishing bait are prominently displayed. The Marina, quite pretty, is doing a booming business.

[I must stop this work in progress here. A friend just called reminding me that it is past 10 and this posting, dear subscribers and readers, promises that a return to more hope and more despair await you.]

However, July 4th is nearly here and let me close by reminding you that the pursuit of happiness is currently denied to too many of the men and women, veterans of our wars –who fought to keep us free–and their families.

Blueroof plans to build a research cottage for a veteran family to provide the kind of decent housing Blueroof has become famous for creating–a place not only of residence but of research to ensure that disabled, aging, and low-income veterans can age in place successfully and that our engineering, architecture, and architectural engineering schools can better learn how to provide designs that improve the quality of their lives.

Words do not escape me. Rest assured, I will return–showered and ready to post and comment on photographs such as this one: