You are here: Home / זאדיע / My father Isadore Solkoff 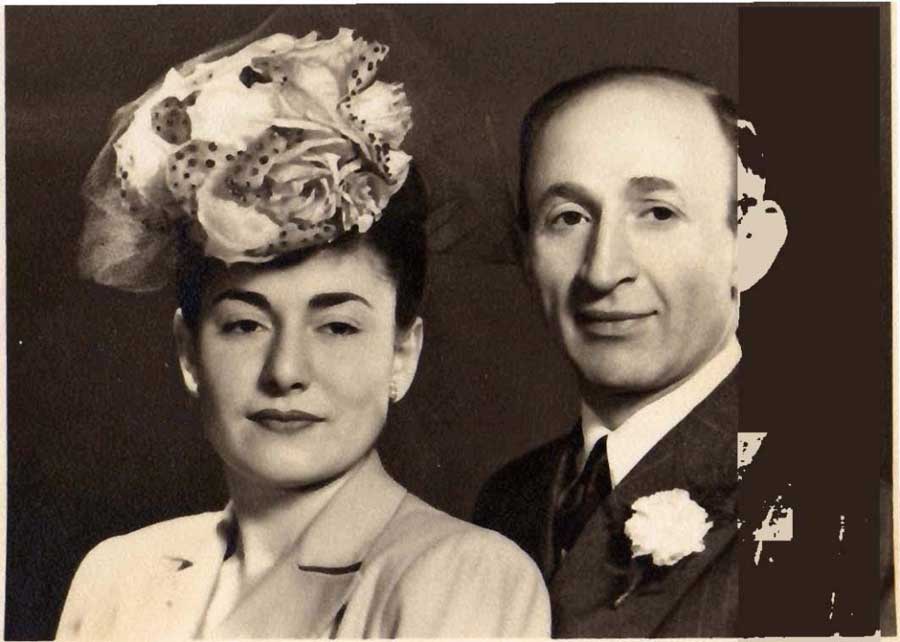 UNION, NEW JERSEY, January 15, 1989: Isadore Solkoff was buried at the Temple Binai Abraham Cemetery. In an Orthodox Jewish service officiated by Rabbi Phillip Goldberg of the United Hebrew Community of New York, the mourners were reminded of Solkoff’s work in introducing Vladimir Jabotinsky and Robert Briscoe to the Jewish Community of New York City.

Vladimir Jabotinsky (1880-1940) was an early Zionist leader who is buried in Jerusalem next to the grave of Theodor Herzl, the founder of Zionism. Jabotinsky was an extremely controversial figure. He was also a brilliant orator, capable of delivering his speeches in several languages, including English and Hebrew, which as an adult he learned to speak Hebrew fluently because he believed that every Zionist should speak Hebrew. Although he died in 1940, he predicted the Holocaust, advocating relief measures so Jews could be sent to Palestine. He also advocated strict military training for Jews and a series of summer camps for youth around the world were opened for that purpose. One of those camps was located in suburban New York.

Solkoff arranged for Jabotinsky to speak to a packed crowd at Town Hall in New York City in March of 1935 warning of the impending Holocaust. Solkoff produced a film of Jabotinsky observing military exercises of Jewish youth, later shown at Jewish synagogues in the New York City area.

Jabotinsky was the founder of the Zionist political party now running the state of Israel. Yitzhak Shamir, the prime minister of Israel, was a follower of Jabotinsky. Former Israeli Prime Minister Menachem Begin had been an aide to Jabotinsky. When Jabotinsky died in 1940, Begin inherited Jabontinsky’s movement. Solkoff supported Begin in his efforts to obtain arms and get them into Palestine. Then in 1948 when the state of Israel was created and the War of Independence took place, Begin’s troops obtained arms despite a United Nations embargo. Solkoff donated his correspondence with Jabotinsky to the Jabotinsky Museum in Tel Aviv.

Solkoff worked with members of Jabontinsky’s United States supporters who formed an organization based in New York City called the Revisionist Zionist Organization. They publicized the difficulties of Jewish refugees especially the unwillingness of the British to permit immigration into Palestine. Stories of British insensitivity to Jewish concerns were late in being highlighted by the world’s press. One incident that was highlighted occurred after World War II was over. A ship called the “Exodus” contained refugees from Nazi concentration camps. The British refused to allow them to get off the boat at a Palestinian port. The ship was in poor repair and was incapable of leaving the country safely. The plight of those Jews who had escaped Nazi concentration camps perhaps only to be drowned in a leaky boat because of British policy caused an international sensation. It also led to a best-selling novel based on the incident and a popular movie.

Solkoff was friends with the late Robert Briscoe, who in 1956 became Lord Mayor of Dublin, Ireland. Briscoe was also a fascinating figure. Before the founding of the states of Ireland and Israel, Briscoe regarded himself as both an Irish and Israeli revolutionary fighting a common British enemy.

Briscoe introduced Jabotinsky to the early leaders of the Irish fight for independence. Before and after Jabontinsky’s death, Briscoe worked at transporting Jews from Nazi-dominated countries to Palestine. Solkoff introduced Briscoe to New York City Jewish organizations. Solkoff and Briscoe both collaborated with Ben Hecht to create a highly controversial full-page advertisement on the back page of the first section of The New York Times. The year was 1943. The ad was entitled, “FOR SALE TO HUMANITY, 70,000 JEWS, GUARANTEED HUMAN BEINGS AT $50 A PIECE.” Romania had offered to let their Jewish citizens leave Romania on the condition that the Four Superpowers pay $50 for each Jewish head and agree to transport them to Palestine. The British opposed transportation to Palestine, which was under their control. The Jews who might have been saved died.

Solkoff’s most important contribution to the effort to avert the Holocaust was the fact that Solkoff arranged a secret, private meeting between Robert Briscoe and Louis Brandeis (1856-1941) then a Justice of the Supreme Court of the United States. Brandeis took pride in his influential role with President Franklin D. Roosevelt and in the American Jewish community. The meeting did not go well. It took place at Brandeis’ Washington home. Briscoe gave Brandeis a warning about the American Jewish community’s indifference to the plight of Jewish European refugees. Later Briscoe reported to Solkoff the warning he gave Brandeis. “Your accommodationist stance with the British will result in millions of unnecessary Jewish deaths at the hands of the Nazis.” Briscoe continued, “The blood of those Jews will be on your hands too and that of the rest of the American Jewish community. It will be on your hands even though you do not directly commit the murders.”

Solkoff was a graduate of Columbia College, class of 1924. Receipt of his diploma was delayed six months because of failure to pass a swimming test. Solkoff, who never learned to swim, said that after sitting around the pool for six months trying to get the courage to jump in, the coach took pity on him. “If you jump in, I’ll pass you, even if we have to fish you out with a net.” Solkoff jumped in, sank to the bottom, was fished out with a net, and formally received his B.A. degree.

Solkoff attended Cornell Law School in Ithaca, New York, class of 1930. He practiced law in New York City before moving to Miami, Florida. After becoming a member of the Florida bar, Solkoff specialized in the practice of bankruptcy law, especially Chapter 13, which he used as a device to stop foreclosure on his indigent clients’ homes. Before his retirement from practice in 1984, he represented 97 percent of Chapter 13 suits brought in the United States Bankruptcy Court for the Southern District of Florida. Solkoff met with members of Senator Robert Dole’s staff when they were preparing to make the recent revisions in the bankruptcy law.

He founded the Miami chapter of Parents without Partners, serving as its president. He also formed the Revisionist Organization of Dade County in 1977 to support Menachem Begin. The American Jewish community generally was alarmed because of fears that Begin might be more extremist in his views about Israeli territorial expansion than they thought prudent. Solkoff’s organization helped alleviate those fears. Solkoff met with members of Begin’s staff during a trip to Israel in 1976.

Solkoff died of respiratory failure on January 13, 1989 at the Miami Jewish Home for the Aged at Douglas Gardens in Miami, Florida. He was born on March 14, 1902 in a field outside Odessa, Russia and came through Ellis Island as a refugee from a Russian pogrom.

He is survived by his wife Wilma of Miami, his grandchildren Joanna Solkoff, Melissa and Mark Schollmeyer, Jason and Lisa Herskowitz. He is also survived by his brothers Benjamin, Morris, and Ephraim, and his son Joel of Washington, D.C. Joel Solkoff is a senior writer at the U.S. Postal Service and is the author of The Politics of Food and other books.

News of Isadore Solkoff‘s death was delayed at his request. Also at his request, the funeral was private and in accordance with Jewish law. Memorial contributions may be made to either of two Miami organizations: the Guardianship Program of Dade County, Miami, Florida or the Jewish Home for the Aged at Douglas Gardens.

N.B: I am Isadore Solkoff’s son Joel and I now live in State College, PA. I wrote this obituary notice in 1989 shortly after my father’s funeral. My daughter Joanna Marie Solkoff also attended the funeral and watched as this notice was written on a computer and preserved on a floppy disk. The floppy disk was destroyed and the only copy of the original text was preserved by the Jabotinsky Institute where Amira Stern, Director of Archives, emailed it to Joel from Israel in October, 2011.

Isadore Solkoff arranged a critical interview between Robert Briscoe and U.S. Supreme Justice Louis Brandeis. The interview is recorded in Briscoe’s 1959 autobiography For the Life of Me. It is also documented in correspondence Solkoff initiated with Justice Brandeis.

The meeting between Robert Briscoe and Justice Louis Brandeis was the most important accomplishment of Isadore Solkoff’s life. According to Briscoe, Brandeis almost certainly reported the meeting to the President Roosevelt. Roosevelt’s refusal to act on the information resulted in the unnecessary deaths of millions of Jews in Europe.

When I was born in 1947, my father was a man burned out by the fact that he had the vision to see the impending tragedy, did everything he could to avert it, and had to live with the tragic reality that he had failed. Jabotinsky was and remains today a controversial figure. He was by all accounts a leader of astonishing magnetism whom my father loved with a love which could not be compared. Isadore Solkoff’s tombstone reads, “Follower of Jabotinsky.” When my younger daughter Amelia was born, following Jewish custom of naming children in honor of the dead, her mother and I gave her the middle name Altalena.

Altalena was Jabontinsky’s pen name. It is also the name of an arms ship that was brought into Israel in the middle of the 1948 War of Independent which to this day is a source of passionate controversy. As one Israeli asked me querulously, “You named your daughter for an arms ship.” I replied, “No, I named my daughter for the man the arms ship was named after.” Either way my father would have been pleased and my father’s love for me was steady and pure and this act of homage is the least I could do.

It is worth noting that after naming my younger Altalena, I received a lengthy letter from my late beloved mother Miriam Schmerler begging me not to name my daughter after that awful man Jabotinsky.

Jabotinsky had served in World War I as co-captain in the Zion Mule Corps with David Ben Gurion, Israel’s first prime minister. The two hated each other and the views they each represented. My parents met at a synagogue weekend where members of various Zionist groups presented their ideas. My mother was a follower of Ben Gurion. My parents’ marriage was not made in heaven.

The resolution to the inter-Zionist animus, which continues to this day, must be solved before peace in Israel can possibly be achieved. Peace with the Palestinian community and their Arab neighbors is the only way the state of Israel can preserved. Ironically, both Jabotinsky and Ben Gurion would agree with this statement.