You are here: Home / Disability and Elderly Issues / My younger child Amelia, English teacher living in Spain (and amateur roller derby star) is engaged to be married 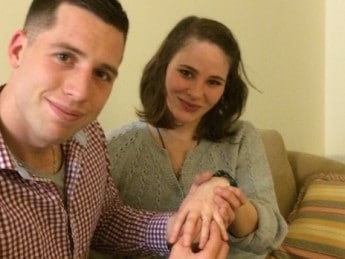 January 17, 2017 is an appropriate date to announce the engagement of Amelia Altalena Solkoff to Javier Blanco.

The date marks the 1925 birthday of Amelia’s late paternal grandmother Miriam Pell Schmerler zt”l who was close to Amelia and her sister Joanna.

Amelia teaches English in Pontevedra, Spain (on the Portuguese border) where she is also an enthusiastic member of the local roller derby and rugby teams. With the exception of brief visits to the United States, Amelia has lived in Spain for three years, previously residing in Pamplona as well as spending a summer working on farms in the Basque region and the Canary Islands.

Javier Blanco is a sergeant in the Spanish army. The couple met in Javier’s hometown of Pontevedra where his mother and brother reside. Javier and Amelia currently live in Toledo.

The couple plan to marry in Pontevedra or nearby during the summer of 2016. The closest airport is Vigo, the fastest growing town in Spain. [Editorial note: Plans schmans. The couple married in Chapel Hill, North Carolina on August 6th. They honeymooned in Jamaica.]

Extensive additions, revisions, and amplification of Amelia and Javier’s engagement and marriage will appear on this site. Suffice it to say Amelia’s mother Diana Bass, sister Joanna, Joanna’s husband Jade and I are delighted.

I was present at the birth of both my daughters. I watched them grow up, receive an education, become employed and generally suck up a large portion of my energy (a process which continues to this day). Watching my daughters marry (when images of their birth continually flash through my mind) is a startling reality.

Especially mystifying to me are my daughters’ attraction to military men, each of whom I approve.

My primary hero is Dr. Martin Luther King, Jr. whose practice of non-violent resistance I have held up as an example to my daughters. I received conscientious objector status from my draft board during the Vietnam War which was an evil war. Perhaps, I have a recessive military gene. Go figure.

Javier plans to obtain a library card before getting married.