You are here: Home / Digressions / On Writing for Bashir Gemayel: Blown Up After Being Elected President of Lebanon 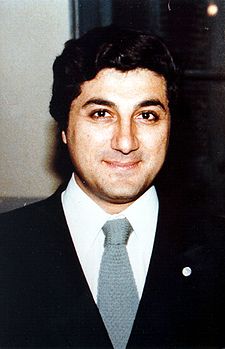 I ghost wrote an article for The Washington Post on Bashir Gemayel on a rush rush well paid project which ended that week when:

I once worked for Bashir Gemayel, Christian militia leader and president-elect of Lebanon. He was blown up while giving a speech before assuming presidential office; succeeded by his younger and less able brother.

The Washington Post said about Bashir Gemayel, in an editorial on the successful assassination, “Yet there was good reason to believe that he had sobered and matured and that he was dedicated, as he put it on our op-ed page the day of his election, to ‘the unity of Lebanon; the uniqueness of the Lebanese experience, and liberty, security and justice for all Lebanese within a democratic government that guarantees all citizens basic freedom.’”

I wrote those op-ed words attributed to Bashir Gemayel. I wrote them two days before the op-ed piece appeared. The date of Bashir’s murder was Sept. 14, 1982. The period I am about to discuss took place about two weeks earlier when considerable shuffling was going on regarding the date of the parliament vote for president of Lebanon.

I have to emphasize here that this is not a story about Bashir. I never met him. He was in Lebanon when I was hired. The person [the Man] who hired me was the head of a freeLebanon organization, which could easily have been called The Free Lebanon Organization.

The Man had leased a large building in Foggy Bottom, where the State Department is located. The Man’s job was to get help from the U.S. government to support Bashir’s efforts to become president of Lebanon. In my mind, I picture Bashir in Lebanon in late 1981, probably in Beirut, putting down his machine gun (probably an Uzi, the Israelis and Bashir were pals), turning to Fred [let’s call him Fred, the Man], and saying, “Fred, hire me a public relations firm in Washington.” Fred hires the Hannaford Group.

The Hannaford Group had strong connections with President Ronald Reagan. It was headed up by Peter Hannaford, whose major achievement was the writing of Reagan’s brilliant and significant-for-the-outcome-of-the-1980-election speech. The nominating speech was especially critical because having united the right-wing behind his candidacy (lock-step), Reagan in accepting the Republican nomination for president of the United States could now turn his attention on Independents and even Conservative Democrats to support his candidacy. For the first time in the history of the Republican Party, someone quoted the name Franklin D. Roosevelt with approbation from the podium. Here was conservative-as-can-be Reagan reaching out to the rest of the country, saying that the Democrats had polluted their own objectives, abandoning the traditions of Franklin D. Roosevelt. Times had changed. The Republicans are now the party of Franklin D. Roosevelt. I, Ronald Regan, know because I once voted for FDR because I believed in his principles and those principles are why I am running today.

I am breathless at the brilliance of the speech. I invited Peter to the Washington Speechwriters’ Roundtable, an excellent group, to talk about the speech. I distributed copies to the fellow speechwriter-members in advance. Each had read the speech and had notes and complete written-out questions and we discussed the speech, paragraph by paragraph, with Peter. Peter later referred me to the Lebanese group headed by Fred because Fred needed someone to write a speech for Bashir Gemayel.

When Fred called Peter asking for a speechwriter, Peter called me. Peter told me to call Fred. We met. By the end of the day, I had negotiated one sweet deal for myself and I was depositing a check for $1,900, which was an advance.

To earn my advance and do the actual work I had to produce a speech for Bashir Gemayel, learning a lot about Bashir and a lot about Lebanon, and write it in a short period. I insisted upon access to instantaneous research and I was assigned an economist at the World Bank who was a member of the group and later appeared on Meet the Press after becoming ambassador of Lebanon (and treating me to a deluxe, friend of the ambassador tour of the embassy, which was one back-slapping trip).

His name is Abdullah Buhabib. From the time that Fred assigned Abdullah to me we were in communication with each other constantly. While I was in my bank counting my money, Abdullah was getting his headquarters ready to supply me with material urgently. The first request was for back-copies of Bashir’s speeches. Since Bashir generally spoke in Arabic and French, English copies were not plentiful.

I suspect that all good speechwriters write to an audience. The audience I was writing to was the people of Lebanon. You know, a speech where Bashir says, I don’t hate Muslims any more. Come let us roll up our sleeves and in the interest of a united Lebanon let brotherhood reign—a good speech for an inauguration. So, I was writing the speech for delivery by the president of Lebanon upon his assuming office.

I said to myself, “Let’s pretend. Let’s pretend Joel has just been elected president of Lebanon holding his hand on a Koran and a Bible, swearing to uphold. And the first thing I want to say to my people is….”

Full to the gills with research, I sent Abdullah home. I researched some more. By 3 a.m. I was ready to write. I sat down at the Royal Standard manual typewriter and rolled in a piece of paper and wrote a speech of reconciliation. Reconciliation (come let us reason together) being the main theme and then I let reconciliation serve as a Christmas tree for all the issues Abdullah listed and some light touches—basically stuff I made up after reading English versions of speeches written by someone who knew little English.

I delivered the material to Abdullah. I had hoped Abdullah would regard my draft as a draft and give me comments. I did not want to deliver a final version without incorporating Abdullah’s comments (and, indeed, until Bashir had time to read it, which I am sure he did, keeping, I suspect, close tabs on my writing progress). Abdullah was in too much of a rush. In the interim, Bashir had become hot news and Abdullah had agreed to deliver something to The Washington Post. Abdullah was getting so much pressure that he didn’t care if I got it right.

The Washington Post was blitzing over Bashir who had risen overnight from being a leader of a powerful Christian militia in Beirut into a Significant International Figure. There was little information on Bashir available. The Post had called Fred. Fred had everyone in the Lebanese organization working frenetically. Without quite realizing that he had done so, Fred had arranged to provide an op-ed page piece to The Washington Post when Bashir was elected and then gave the responsibility for producing to Abdullah. Bashir’s election was a surprise. The negotiations that finally led to a meeting of a parliament with a quorum hastily brought together elected Bashir Gemayel. Bashir Gemayel never approved a word of the copy printed on the entire Washington Post op-ed page on the occasion of his/my election.

I was roundly congratulated for my work. The Lebanese were very happy. We went to a Lebanese election party. It was a heady time for those of us at the Bashir campaign. Bob, the non-drinking, non-smoking Boy Scout at the Hannaford Company, a junior vice president, joked how we would all go over to Beirut and smoke hash together. Peter was making arrangements to visit Bashir in Beirut. He was making flight and other travel arrangements when something came up and Peter reluctantly gave up. As it turned out, the arrangements were for Peter to be close to Bashir at the occasion where Bashir was blown up. It was a close call for Peter, who was essentially my boss. It was a sad time. Bonds that were forged in a time of lunacy were literally, to mix images, exploded. The client was dead. Long live the new client.

Bashir was a Maronite Christian, part of the Coptic rite. In Washington, D.C., there is a Coptic rite associated with the Roman Catholic Saint Matthew’s Cathedral, down the block from the Mayflower Hotel. At St. Matthew’s, the bier of John Fitzgerald Kennedy rested before lying in state.

At the D.C. memorial service the prominent mourner was Geraldo Rivera, who arrived in a beautiful, narrow white limousine bringing with him ABC television cameras. The representative from the state department was acceptably high on the organizational chart so that the Lebanese were not offended by state department indifference. A guy from Teddy Kennedy’s office gave a speech. Geraldo Rivera issued the usual emotional let me tell you a personal story eulogy, a genre he had mastered.

Then the Coptic priest concluded the service. “Of course,” he said, “the best way to get to know a man is in his own words.” The priest quoted a lengthy excerpt from The Washington Post, words I had written at 3 and 4 o’clock in the morning only within the past week.

—Joel Solkoff
[This article originally appeared on the Voices of Central Pennsylvania (my home away from home) site as a companion to my print Voices  2009 review in the Arts and Entertainment section on the film Waltz With Bashir.]