You are here: Home / Disability and Elderly Issues / Saving Medicare billions: Trying too hard can get in the way 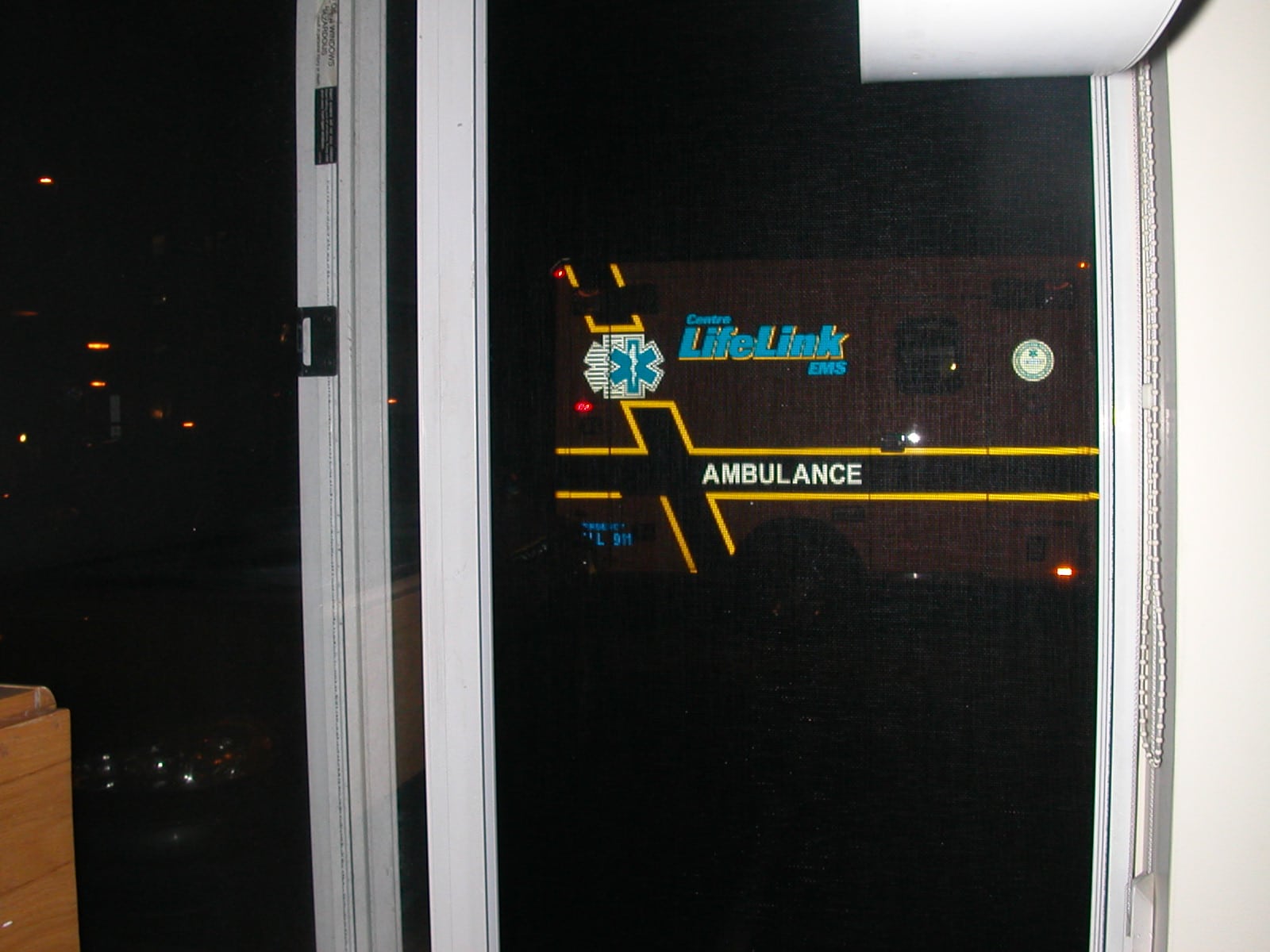 Today is Sunday, February 26, 2012.  I took the photograph above last week. My apartment is within an eight-story building housing 90 low-income elderly and disabled individuals, an ambulance parks outside my window at least once a week. Sometimes my neighbors and I return. Sometimes, not. The cost for Medicare, Medicaid, and other services to go on the gurney ride to the hospital and beyond is many times higher than the cost of preventing and treating.

The following article appeared in the October, 2011 issue of  HME News and it still reflects an ongoing concern. Following the article, I will provide a memorial note on one of the residents who did not return.

” I have saved up enough pills to kill myself,” a neighbor told me, “if I ever have to go to Centre Crest.”

I live in an independent housing apartment building in downtown State College, Pa. The nearly 100 residents of Addison Court are disabled or elderly. Most of us are poor–the more affluent are on Social Security or Social Security Disability and Medicare.
At least once a week, the ambulance stops by my window and a resident goes off to the hospital. The lucky return. The not-so-lucky move on to Centre Crest, the default public nursing home about 11 miles away, where assisted living means expensive round-the-clock care, diaper changes, attachment to machines that keep the biological aspects of life going, medical personnel who make sure medications are taken correctly, and a world view that echoes Dante’s inscription over Hell: “Abandon hope, ye who enter here.”
Last year, Pennsylvania’s Department of Aging estimated it costs Medicare $40,000 extra each year for a resident to move from an independent living to an assistive living facility. The loss of dignity to the individual is incalculable.
The French philosopher Jean Paul Sartre observed that when one tries especially hard to listen, often the trying gets in the way of hearing. Medicare is trying too hard to do the wrong thing. Medicare‘s purpose is not to save money, but to provide health care in a way that concentrates on improving the quality of life. Recent evidence on the brain’s adaptive capacity provides hope that not only can individuals resume physical capacity from the devastation of a variety of afflictions that affect us at Addison Court, but also we can regain our talents to improve this society, not simply take from it.
“The Brain that Changes Itself, Stories of Personal Triumph from the Frontiers of Brain Science,” by Columbia University’s Norman Doidge, M.D., points to the brain’s ability to recover from strokes and other disorders with rehabilitation and concern.
“Traditional rehabilitation,” Doidge writes, “typically ended after a few weeks when a patient stopped improving, or ‘plateaued.’ And doctors lost the motivation to continue.  But…these learning plateaus were temporary…Though there was no apparent progress in the consolidation stage, biological changes were happening internally, as new skills became more automatic and refined.”
The Obama administration’s penny-wise-and-pound-foolish cutbacks on availability to durable medical equipment, rehabilitation services, and home health care are forcing residents of independent living facilities into the Centre Crests of this country. For example, the narrow focus is apparent in Medicare‘s frequent citations of the Congressional Budget Office‘s competitive bidding estimates of relatively insignificant savings for Medicare Part B ignoring the astronomical costs that will result to Part A when disabled individuals like me can no longer pick up the phone and call my local medical equipment provider. Instead, I must wait for a competitive bidding winner (several have unsavory reputations and some are based out-of-state) to provide a battery. Delays could easily force me into Centre Crest as a result of falls, problems getting to the bathroom, etc. Delays would rob me of the ability to work as an adviser on virtual reality models for construction of future aging in place housing–construction which will result in significant Medicare savings.
Medicare is discouraging the necessary alliance between rehabilitation therapists and medical suppliers. This alliance will help restore the ability of my fellow residents to function and contribute to society.
“Individuals with disabilities remain one of our nation’s greatest untapped resources,” said Rep Jim Langevin, D-R.I., the only quadriplegic in Congress. To release the untapped resources of the elderly and disabled, Medicare must stop thinking about saving money and start thinking about improving health. The money saved as a consequence of concentrating on what is right will astonish the body politic. Providers of durable medical equipment require the support of consumers like me. Providers and rehabilitation therapists have been slow to recognize that in unity there is strength. Together they must spread the word that when an individual becomes old or disabled, science is rapidly increasing the ability to regain talent and good health.
–Joel Solkoff is the author of “Learning to Live Again, My Triumph over Cancer” and is adjunct research assistant at Penn State’s Department of Architectural Engineering.
+++
Memorial Note: Tonight, November 14, 2011, Jack Seidner aged 93, my neighbor and friend at Addison Court, State College. PA, died while talking to his son who had called from Israel. He died at Centre Crest, an assistive care facility in Bellefonte, PA, 11 miles from Addison Court.
Jack was a veteran of World War II and was a monthly calendar boy on the Jewish War Veterans calendar last year  He will be buried beside his wife in Harrisburg at a private funeral.

Jack was a wonderful man. He was basically an intellectual although he hid it as much as possible. When I wrote a story about home medical oxygen, oxygen which he received to stay alive, he refused to be photographed saying, “I have been studied enough.”
His sense of humor was ever-present, sometimes to the point of reciting bawdy limericks to the residents of Addison Court. I will miss him. He died at Centre Crest. The article below, originally published in HME News on September 27, 2011, is dedicated to his memory. In these days of turmoil at Penn State University, the need to care for the real needs of this community should be apparent.