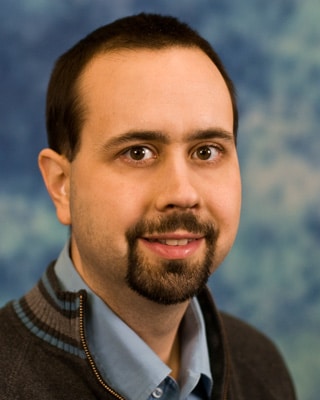 Editorial note: Of course what everyone wants to know these days is what effect will  Zynga have on Second Life? (Readers are encouraged to provide answers.) What follows is a guest blog by John J. Meier,  assistant librarian at Penn State‘s Physical and Mathematical Sciences Library providing background on Second Life. This originally appeared in Voices of Central Pennsylvania with the title, “PSU’s Second Life Encourages Students to Get One.”
When I was trying to get a better understanding of the effectiveness of Sonali Kumar’s 3-D model of Blueroof Housing for disabled and elderly individuals, John introduced me to Second Life as a quick and free way of being immersed in a virtual world through the use of an avatar who shares this world with millions of avatars controlled by millions of globally immersed participants. Psychologists and human resources specialists use one of Penn State‘s islands in Second Life‘s 3-D universe to provide counseling to students in emotional distress.
This avatar is Speedy Przhevalsky.

Speedy is getting ready to change his appearance. I once spent two days trying to decide among a startling number of options regarding the size and shape of his ears, nose, eyes and so on until there was too much to decide and I decided to send him off to walk, run, fly, explore, buy, create, receive virtual therapy, and eventually convince me that he is more real than I am.
+++
Second Life’s Virtual World Includes a Detailed Alternate Reality at Penn State
by
John J Meier, Science Librarian, Physical and Mathematical Sciences Library at Penn State
The future has made a great deal of promises, mostly through the voice of science fiction films and books, but we have yet to see flying cars or man on mars or The Matrix.  Or maybe we do have that last one after all.  In the eponymous film, The Matrix was a fictional world generated by computers, a virtual reality where every living person existed and some could fly and dodge bullets.  There is actually a computer generated virtual world where anyone CAN fly and interact with other people in another Earth, it is Second Life.
Second Life is a computer program, available for free download, which allows anyone to enter and interact in the virtual world of Second Life via broadband Internet access.  Unlike some online worlds, such as the popular World of Warcraft, Second Life has no monthly fees for the basic user.  The money used in-game, “Linden dollars,” can be purchased with real money and provides the company behind the game with a source of income.  They also lease the virtual real estate to individuals and organizations on a monthly basis.  You must be 18 years or older to play Second Life, though there is a Teen Second Life in a similar virtual world for 13-17 year old users.  Second Life has considerable “adult content,” which has areas specifically set aside in the game recently.
Each user sets up an avatar to use in the game, which is a representation of them in the game world.  These avatars are often human looking, but can be anything such as an animal or fantastic creature or even an inanimate object.  The avatar acts as the person controlling them:  conversing with other avatars by chat, sometimes known as instant messaging; walking, flying or teleporting around the virtual world; or interacting with other objects in the world, such as chairs or buildings.  Objects are created for the world by the users of the game and through a special programming language called the Linden Scripting Language. These objects can also move and operate on their own.  This allows for creation of items like cars, clothing with moving images, or almost anything imaginable.
While Second Life could be called a computer game, there is no winner or official goals.  Success is measured in some similar ways to real life, such as money and property as well as respect in the community.
Creativity is highly prized and since the cost of creation is mainly time, it is possible for anyone to be successful.  Interactions in the game can even be recorded as videos, which spread outside the game as movie shorts or music video remixes.  Since avatars can also be customized, the appearance of other users in itself reflects a dramatic diversity and can challenge the expectations of a novice user.  Despite the seemingly limitless possibilities, Second Life seems more like the real world than many other virtual worlds and online games.  Most avatars look human and objects are often those found in the real world at their normal scale.
Much of the real estate in Second Life is the property of organizations or companies, which often purchase one or more of the standard “island” sized properties.  They often use this land to create a virtual presence in the world as a way to engage customers, interest potential employees, or to conduct meetings and informational events.  In a global economy and worldwide commerce distance is often the limit, though it has no meaning in a virtual world where travel is instantaneous.
Penn State has a number of islands in second life: an island for the College of Information Sciences and Technology (IST), an island for the Penn State Berks Campus, an island for the Penn State World Campus and an island in Teen Second Life for the Penn State Admissions Office.
Since almost any object can be created in second life for only the cost of time, it is often used to create a presence for a real institution or service.  It can also allow users from across the world to interact in a similar environment to the real world. Research projects in Second Life can also take advantage of the large-scale social and economic interactions going on between the millions of registered users.
–30–
Copyright © 2011 by John J. Meier.