Naturally, I begin with myself. The primary theme of my website is based on a scholarly body of literature known as experienced-based design which for the layperson, such as myself, means that I should have a role in the design of the world I live in.
1. For an attempt at a coherent presentation of me: see http://www.joelsolkoff.com/posts/about-me/ and if you want to read my resume, click on the hotlink where my name appears.
2. My focus. Specifically, I am focusing on two separate worlds (or perhaps world views would be more correct); namely:
3. Location.
McKeesport, PA is the unlikely location for a presentation of how the reality of technology currently being constructed should serve as a model for the future. The overriding example presented here is a non-profit corporation Blueroof Technologies founded 10 years ago, where I spent three days and two nights in December as the first invited guest at the Blueroof Experimental Cottage shown here with Blueroof’s founders on the front porch (a front porch identified by elderly residents as being significant to their sense of well-being): 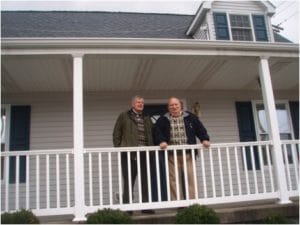 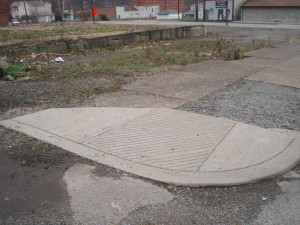 The principal characters in this encomium to Blueroof’s founders are Dr. Robert Walters, (left) a former engineering professor at the local campus of Penn State, and John Bertoty, a retired principal of the local high school.
A lengthy profile of John Bertotoy (scan the words; look at the pictures) is available: http://www.joelsolkoff.com/blueroof-reality/john-bertoty-at-blueroof/
My under construction profile of John’s cofounder reads: “Robert Walters is the kind of engineer who collects more data than he knows what to do with, but wants more.” Bob currently is collecting data on the number of times the residents of a non-experimental Blueroof residence open their refrigerator doors.
Assume your 86-year-old mother is living alone in an apartment (which is basically what a Blueroof Cottage is). If she has not opened her refrigerator door for three days, that indicates something is wrong. The wired cottage alerts you in a timely fashion and you are able to get there before three days, whatever default Bob contrives. Instead of arriving at Mom’s residence to find her passed out on the floor, requiring an ambulance and who-knows-what, you are able to get over there and help your mother out.
This is a device Bob contrived to measure activities of daily living (ADL) and signal alarms and phone calls for help. The wireless BlueNode System (motion detectors and other sensors not shown, nor the refrigerator): 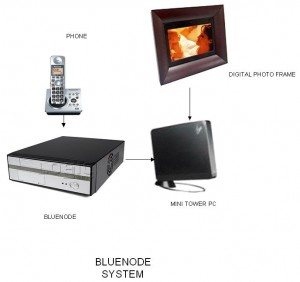 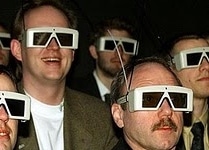 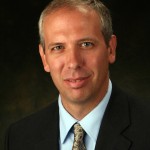 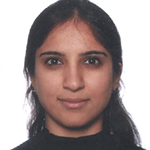 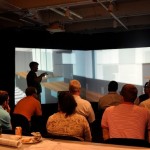 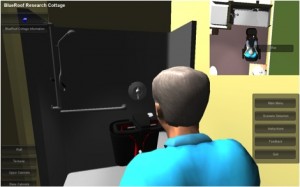 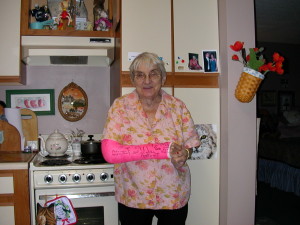 4. Baby Boom Demographics
One out of every four Americans is a part of the Baby Boom generation which the U.S Census Department defines as those 76 million Americans born between 1946, the year after World War II ended, and 1964 when prodigious use of birth control and other factors caused the annual birth rate to fall below 4 million.
The first baby boomers have already begun to retire despite the fact that most jobs in the United States are held by baby boomers. When the members of my generation give up their jobs a whole slew of disaster scenarios appear—whether you go to the U.S. Census Bureau’s excellent website or consult Google’s index and find this expression of impending disaster:
http://endoftheamericandream.com/archives/in-2011-the-baby-boomers-start-to-turn-65-16-statistics-about-the-coming-retirement-crisis-that-will-drop-your-jaw
5. Who is the primary audience for this information? Why it is the Ford Foundation, based in New York City which has demonstrated a tradition of providing funding for significantly innovative projects that improve the lives of indigent, elderly, and disabled individuals throughout the world (and the world includes the United States).
How do I know of the Ford Foundation’s excellence when it comes to recognizing innovative excellence. In 1981, I worked for then Ford President, the distinguished  Franklin Thomas who also chaired a major Rockefeller Foundation (also good guys) report South Africa: Time Running Out, The Report of the Study Commission on U.S. Policy Toward Southern Africa. http://www.foreignaffairs.com/articles/35145/jennifer-seymour-whitaker/south-africa-time-running-out. I wrote chapter 13.
Ford has a tradition of distinguished leadership exemplified by McGeorge Bundy, who left Lyndon Johnson’s White House to become Ford’s President.
Today, the President of Ford is Luis Antonio Ubiñas. His official biography notes: “Prior to joining the Ford Foundation, Luis was a director at McKinsey & Company, leading the firm’s media practice on the West Coast. He served technology, telecommunications and media companies, working with them to develop and implement strategies and improve operations. Much of his work focused on the opportunities and challenges represented by the growth of Internet and wireless technologies.”