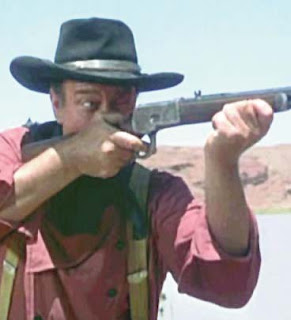 From Where I Sit

John Wayne once granted me a telephone
interview on his experiences with cancer.
For those readers too young to remember [a
concept that defies imagination], John
Wayne (nicknamed The Duke) was an
Academy-Award winning actor who
appeared in 142 movies. His cowboy and
other macho roles served as an icon for my
generation on how a real man is supposed to
behave.

This is a column about fear. Miriam-
Webster’s Collegiate Dictionary defines
fear as, “an unpleasant often strong emotion
caused by anticipation or awareness of danger.”
Fear “implies…loss of courage.” I am
familiar with the fear that comes from:

Having an oncologist look up from my
pathology file and say, “There is no doubt
about it. You have cancer.”

Sitting for hours in radiation waiting
rooms as my fellow patients look at each
other and wonde who will live and who will
die.

Experiencing the side effects of radiation
slowly burning my spine and resulting in
the odd experience of standing at a jogging
track ready to run (forcing myself to run)
and being unable to do so.

Being unable to walk across a room without
falling—I once fell in front of a
prospective employer three times during a
job interview.

I cannot go from my bed to the bathroom
without transferring to a power chair. I
know about courage and my lack of it,
about appropriate and inappropriate anger
and the need to put my past behind me and
be human—not a cripple; human. Here in
my apartment in State College, I recognize
my New Year’s resolution must be to
behave (to excuse the sexist expression)
like a Man.

Twenty-one years ago I was an arrogant
journalist writing an article for The New
York Times on the emotional effects of surviving
cancer. At the time, society was still
pondering such questions as whether it was
a good idea to tell patients that they had
cancer. Doctors thought it prudent not to
disclose likely side-effects. The newspapers,
examining the statistics on cancer
mortality, featured headlines on the failure
of the War on Cancer. By doing so, the
media had masked the remarkable progress
being made especially among children and
young adults. At a time when my mother
refused superstitiously to say the word cancer
out loud, spelling it letter by letter, parents
of cancer survivors had trouble conveying
the reality that when a child has cancer
it need not be a sentence of death.

I was not sufficiently savvy to realize that
the vagaries of life were mirrored in the
familiar vagaries of journalism. As I later
learned, the chief editor of the Times’
Magazine made it a practice to reject the
first draft of every free-lancer. Wendy
Moonan, my immediate editor, wanted my
revision to include an interview with John
Wayne. Wayne had lung cancer and since
1964, despite the objections of his business
managers, he served as a spokesman for the
American Cancer Society. His commercials, which
featured a pitch for early detection,
were model John Wayne sounding
essentially like someone who
would shoot you without pause if you did
not immediately send a check, which many
viewers did. Wendy warned, “You cannot
tell him where you got this telephone number.”

I dialed. John Wayne [JOHN WAYNE!]
answers the phone and says, “Unless you
tell me where you got my phone number, I
am going to hang up on you.” I turned in my
editor without a moment’s thought.

Two weeks after the doctors removed
Wayne’s lung, he was back at work making
a movie. “I jumped into a river with handcuffs
on in January…and that was tough. It
kept me from developing a protection
which I thought I needed but which I didn’t
need.” I replied that my experiences with
cancer left me with unresolved feelings that
were getting in the way of living my life. He
dismissed the idea that I should, as he put it,
feel sorry for myself. John Wayne said,
“The thing to do is just try your damndest
without telling anyone else about it.”

For its own reasons, The Times published
my first draft which did not include the
Wayne interview (making this a Voices
exclusive). Less than a week later, I was on
Good Morning America feeling sorry for
myself for a brief moment of public
acclaim. Less than a year later, Wayne died
of stomach cancer. Today, I still remember
his advice with reverence, despite the fact
that I detested Wayne’s politics. In
February, I plan to discuss:

1. The wisdom of John Wayne

2. How to implement that wisdom here in
Centre Country to help reduce fear among
our disabled and aged population.

(Our community’s considerable private
and academic emotional counselors are
invited.)

—Joel Solkoff, author of The Politics of
Food.