Figure 1.1. Nadya Ludwig in her customary position watching the front door at Addison Court and greeting all 95  residents by name [1]

The generation born after the Second World War is commonly referred to as “The Baby Boom Generation.” The U.S. Census Bureau provides statistics on Baby Boomers not as helpful as one would desire. The census definition begins in 1945 (when World War II ended) until the 1960s (when the birthrate began to decline). Only a portion of this demographic is useful for an understanding of housing requirements for the elderly and most especially the disabled. Disability rates are highest  among those 65 and older–the focus for this analysis. [2]

This work is a natural outgrowth of a study I have been doing with Dr. Ali Memari of the Pennsylvania Housing Research Center (PHRC). The study is a guide to designing the entrance and interior of a single-family residence. Portions of this study (to be published independently) are included here to provide guidance on design decisions and principles required to understand methods that must be employed to make housing accessible. Especially helpful is the concept of “evidence-based design” which the architecture, construction, and engineering (AEC) community has embraced. [3]. One former president of the American Institute of Architects has described how evidence-based design has swept through her profession. More to the point, evidence-based design is the overriding principle (described in considerable detail both here and in the technical manual).

The Problem with sociology–Not the digression it seems

The origins of sociology are not in question. The question: Is sociology a science?

When Émile Durkheim established sociology as an academic discipline before World War I, there was no question that sociology was a science. [4] Oh, how the mighty have fallen.

“Science]is a systematic enterprise that builds and organizes knowledge in the form of testable explanations and predictions about the universe,” writes Edmund Wilson in Consilience : The Unity of Knowledge. [5]

I regret to say sociology suffers from failed repute in academic circles. Sadly, this has affected adversely the academic community’s regard for  the popularity of a book I love; viz. The Lonely Crowd by David Reisman et al. who after publication became Harvard’s Chairman of the Sociology Department. [6]

“In midcentury America, sociologists for a while rivaled even psychiatrists in their seeming ability to explain everything about everything. The most influential sociologist of the era was David Riesman… Originally intended for the college classroom, ”The Lonely Crowd” unaccountably landed on the best-seller lists and stayed there for months and months as thousands of Americans anxiously examined themselves and their neighbors for directional indications.

“In short, there’s nothing very rigorous about ”The Lonely Crowd,” but the book feels scientific all the same; its very structure imparts a suggestion of seriousness and gravitas.” This critique by New York Times writer Charles McGrath reflects distress within sociology academia. A notable Harvard sociologist who best expressed this distress is Orlando Patterson. Writing in The New York Times, Patterson states, “The dishonoring of David Riesman, and the tradition of sociology for which he stood, is not a reflection of their insignificance. It is merely a sign of the rise in professional sociology of a style of scholarship that mimics the methodology and language of the natural sciences — in spite of their inappropriateness for the understanding of most areas of the social world.”

The relevance of Dr. Patterson’s criticism to this critique is twofold. First, it is necessary to ensure this analysis is indeed science. Second, it is important to heed Dr. Patterson’s concern that a larger analysis of a problem is missing in the current academic wave of sociology’s repute. Hence I proceed with guarded optimism this analysis must indeed be science. This inquiry focuses on the significance of community when analyzing the effectiveness of renovating housing for the disabled. In doing so, I pay homage to  the principles which Emil Durkheim asserted when he established sociology as an academic discipline. [7]

Fortunately, this analysis uses as its organizational construct the classic work by Robert S. Lynd and Helen Merrell Lynd two Columbia University-based sociologists whose work has consistently been held in high repute.

This analysis reflects its light from the considerable contribution of the Lynds’ 1929 study Middletown. [8] The study helped provide a structure to guide one to an understanding of disability housing and indeed disability and elderly equality. The intent of this analysis is to pour cold water on the sense of accomplishment one achieves from renovating a residence to make it wheel chair accessible. A residence in the wrong place is no residence at all. After all the elderly and disabled are best served by a public transit system also offering dependable para transit.

It is directly relevant to note the disabled and elderly are a group discriminated against considerably [9]. Let us first focus on the matter at hand; viz. renovating. While focusing remember there is a leitmotif here (the community where the renovation takes place) which will emerge as the goal of this analysis. The goal is integration of the house renovated for the disabled and the community without. Without complete integration access is incomplete and resources are wasted.

Let us start with a house where the resident and principal source of income becomes disabled.

The bathroom and bedroom are clearly the areas in the residence where accommodations are required for safety and other purposes. One example of an issue worthy of attention concerns the use of mobility devices  useful for getting from room to room and whose function may affect the ability to make individual rooms accessible.

The issue of a sling an individual can use without assistance to lift oneself up from wheelchair to toilet seat or from bed to wheelchair has a significant effect on the process of home renovation.

For individuals with mobility problems, the bathroom is the most dangerous room in the house. It can be wet leading to falls. Clients may be impatient to get in and out quickly thus lending to its danger. There may be inadequate rails. Depending upon when the residence was built, the entrance and exit may be uncomfortably narrow. This might be a good place to consider removing walls and widening the hallway.

In many older residences, the path leading to the bathroom is a narrow one. Figure BR2 shows the client using a mobility device to come from the bedroom [behind] in the direction of the refrigerator [ahead].

The width of the hallway with the bathroom door closed is 41 inches. ADA standards call for a width of 48 inches. The reader may not help but notice that because of a shortage of electrical outlets, the toaster is on the floor.

With the bathroom door open the width is only 38 ½ inches. Figure BR3 shows what happens when a powerful power chair, driven by a client impatient to get to the bathroom, collides with the door. A door in a narrow hallway causes difficulties for an individual riding a mobility device including the problem of being able to close the door.

One solution is a pocket-door once fashionable in the late 19th Century which is making a comeback especially for those modifying homes for greater mobility. 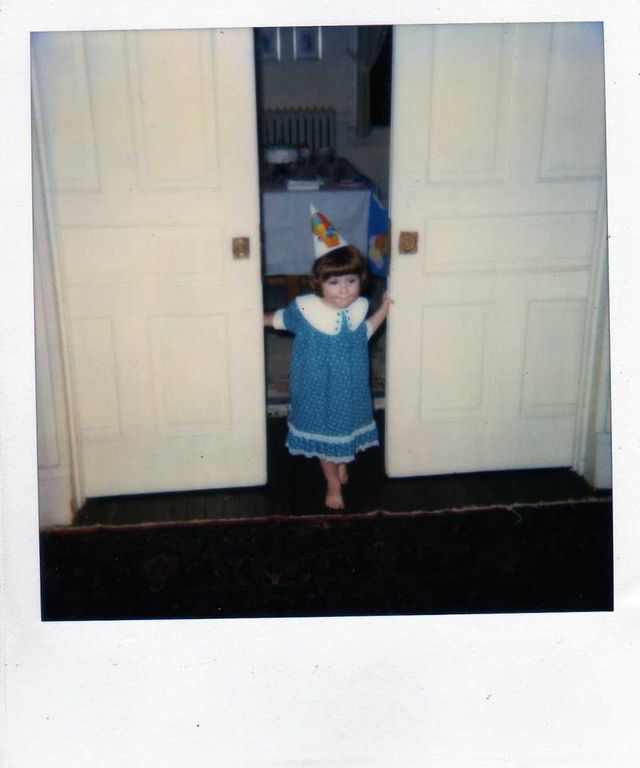 Clients using the bathroom sink below must go elsewhere, to the kitchen sink for example (or bring along their own mirror) to comb hair, apply makeup, shave, and perform other daily rituals.

A lower sink and mirror set are the most immediate solution. Two grab bars at the base of the sink would make it easier for the individual with a mobility disability to stand or maintain balance. A specially designed sink located elsewhere in the residence could save on remodeling costs. Below is a sink installed at an appropriate height in a residence bedroom which can be modified for individual requirements. 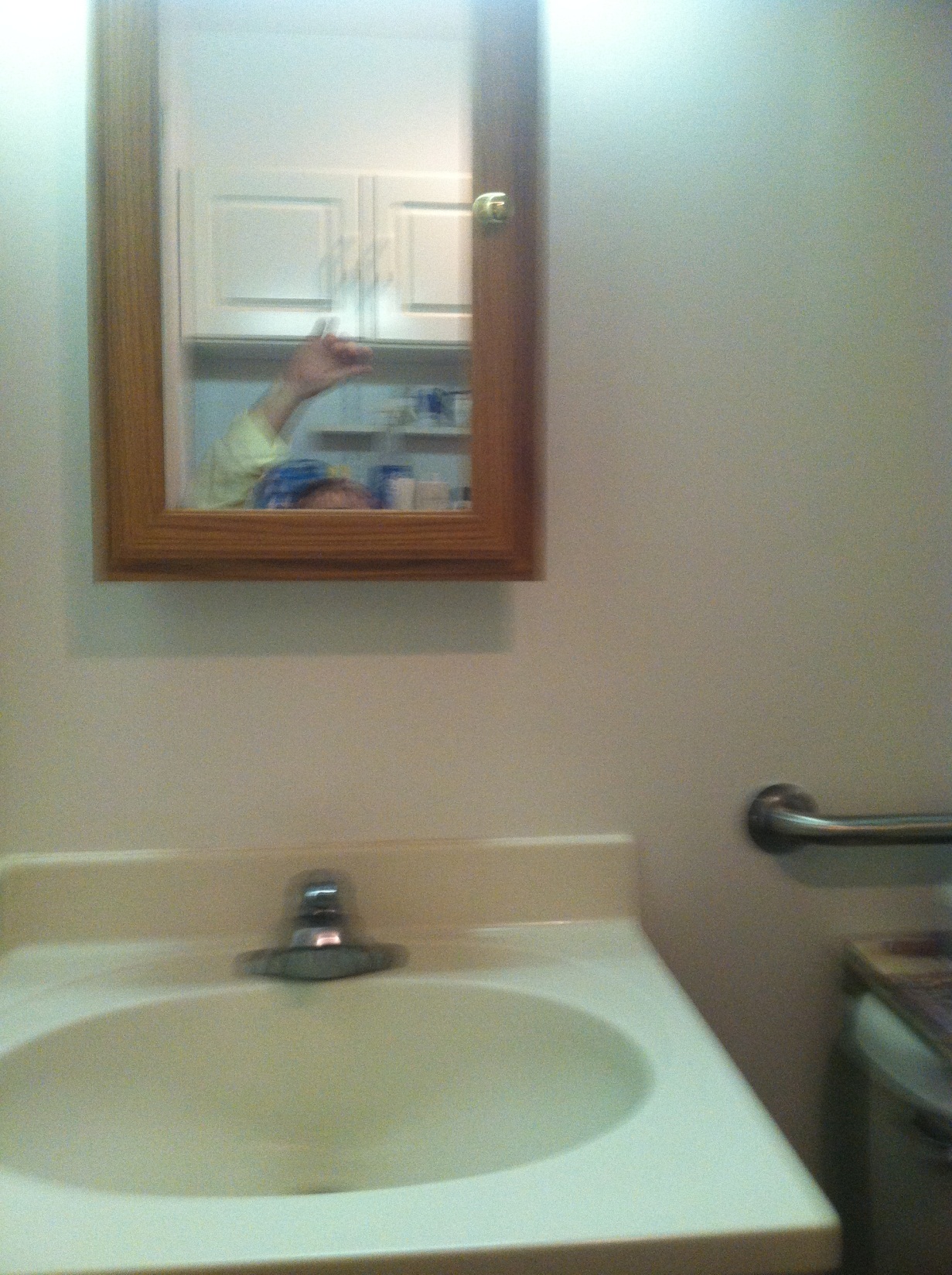 Other bathroom considerations include:

Clients using the bathroom sink must go elsewhere, to the kitchen sink for example (or bring along their own mirror) to comb hair, apply makeup, shave, and perform other daily rituals.

Going to the toilet requires more prudence than adults without disabilities require. A mobility disability, by its nature, means it takes more time to get from one place to another. Individuals used to going to the toilet on a schedule comfortable to them before they became disabled may be surprised at how much extra time they must factor in. 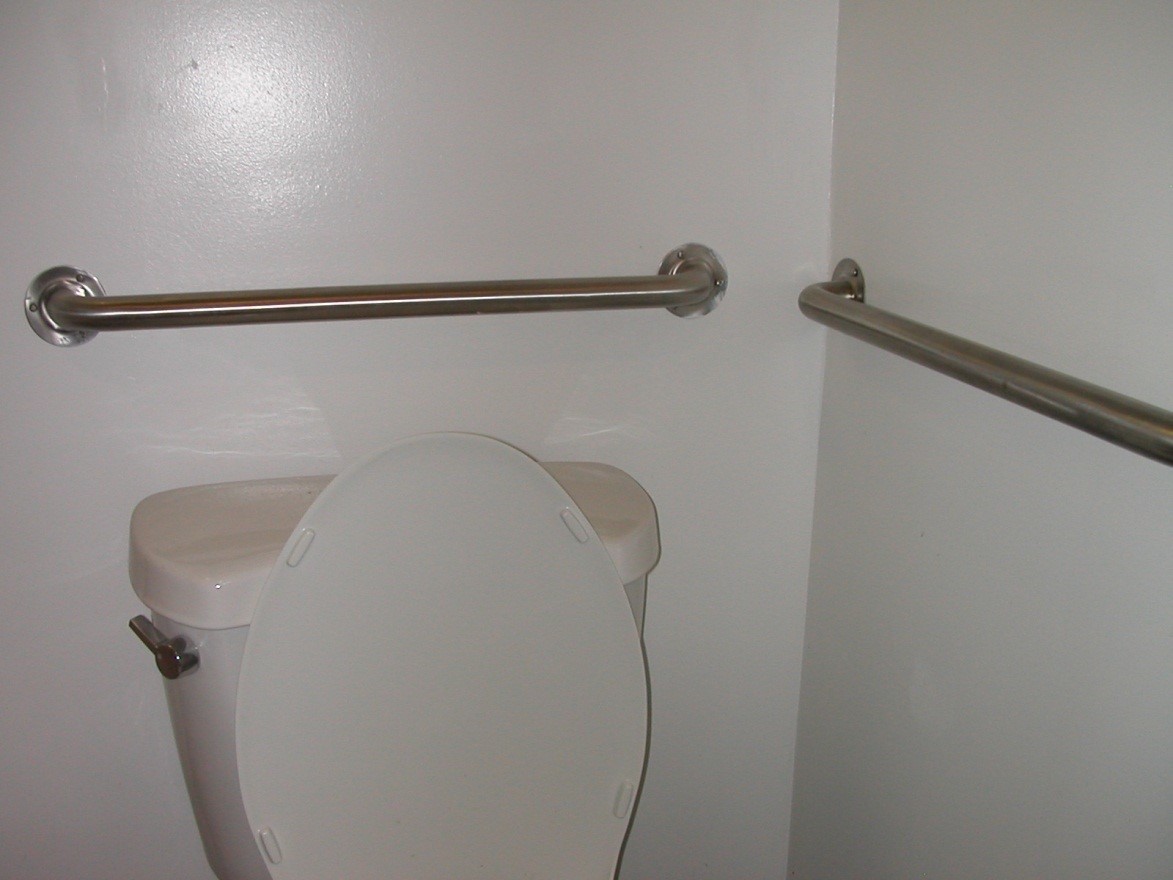 The toilet shown above should be reassuring. The two grab bars are sturdy and well-positioned. However, it is always helpful to make sure the toilet seat itself is securely fashioned and to check each time before using.

For individuals with transference issues, there are transfer boards for going from wheel chair to toilet: 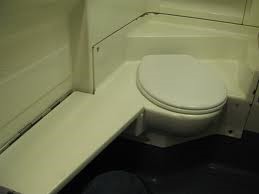 This is a convenient way of transferring from a mobility device to the toilet. Less elaborate transfer boards are available. For those with more serious mobility problems, a sling attached to the ceiling is recommended or one might consider installing tracks on the ceiling so a device the individual can use by oneself can easily be moved from the bedroom where it lifted the individual from bed to wheelchair.

Use of a sling

Within the past five years, two developments have made it practical for individuals with severe mobility disabilities to live independently. The first is the development of a sling an individual can use oneself for transference. The above is not a good photograph and should be replaced with a better one. The second development is the use of the ceiling as a method for locomotion; namely, one puts oneself in a sling attached to the ceiling; tracks along the ceiling make it possible to move across the residence, and one can lower oneself to, for example, a bed or a wheelchair in the kitchen. Notice the ceiling tracks:

Last year, I saw a trailer developed by Blueroof Technologies in McKeesport, PA for the use of veterans whose lower limbs had been amputated. The veteran was able to go by sling and ceiling device from bed to bathroom to kitchen for breakfast and then out into the world on a mobility device. Not all this information is relevant to the bathroom.]

If the individual does not allow enough time to position oneself at or on the toilet, accidents can occur just when they seemed most avoidable. Individuals who have not experienced an accident since childhood and who assumed such problems would not occur for decades find themselves discouraged when an accident occurs. For individuals who suddenly experience mobility problem, incontinence may be a temporary consequence and it is useful for the individual to understand that temporary means temporary. 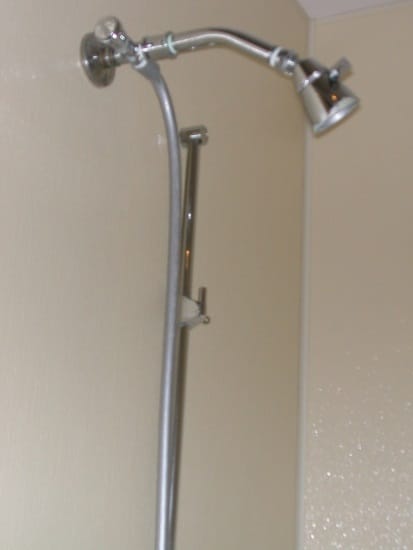 Conventional bathtubs, such as the one below, provide problems involved with getting in and out. The market place, using slings and transfer boards, does make it possible for individuals with mobility difficulties to take baths. However, a roll-in shower, unless other considerations are involved (e.g. skin disorders, the requirement to soak limbs, and the like), the roll-in shower is probably the most cost effective.

Off the shelf technology gives residents an added level of protection. Figure BR1  shows a motion detector in the bathroom. Motion detection makes it possible to alert caregivers (by a voice simulator automatically calling 911 or another number) if someone slips in the shower, for example, and does not get up according to a pre-programmed time schedule. The cost of this technology is relatively modest and has been falling steadily.

Imagine using this imaging technology displayed for design and working out such issues as how to get from scooter to bath chair? One might: 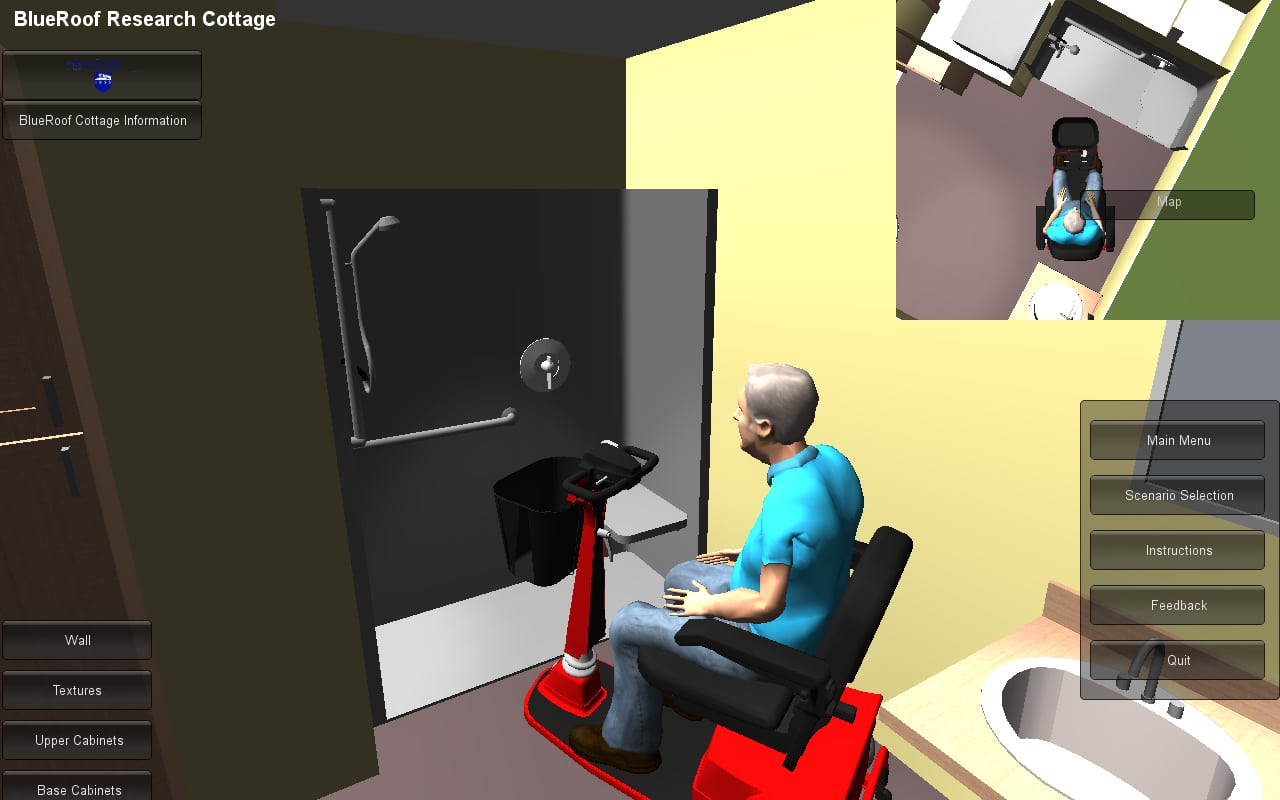 Doidge, Norman (2007). The Brain That Changes Itself, Stories of Personal Triumph from the Frontiers of Brain Science. New York, NY. Penguin Books.