You are here: Home / Digressions / Today I am 66 years old 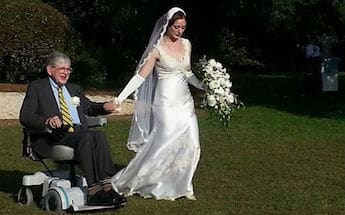 I was listening to a George Strait song at midnight Troubadour.

Troubadour is a song in which an older and wiser George Strait sings:

“I still feel 25 most of the time./ I still raise a little cain with the boys./ Honky Tonks and pretty women, But Lord I’m still right there with ’em / Singing above the crowd and the noise…”

Many friends do not understand that my musical passions consist both of Mozart and country music.

Speaking of loss of focus: I am translating Psalm 2 from the Hebrew. “Why do the nations gather?” the apocryphal David begins.

Why indeed? This is not a happy poem despite the fact that the Hebrew sounds are so beautiful.

A week ago today, I gave away my elder daughter Joanna Marie Solkoff to marry Jade Kosmos Phillips. Above is a photo of me giving her away—a photo that looks as though she is giving me away.

Joanna and Jade are on a two-week honeymoon to South Africa.

My younger daughter Amelia, maid of honor, is now back in rural Spain—having called me on Wednesday from the Chicago airport before boarding a non-stop to Madrid.

It is odd in a way I cannot explain having grown children.

Now I am back from Mebane, North Carolina, named for an American Revolution General whom I expect helped General Green become defeated at Greensboro and hence, defeated, have the city in which he lost named after him.

This photograph from right to left shows my sister Sarah Schmerler, her son Asher Simonson, and her husband and Asher’s father Robert Simonson.

In the background and foreground is a display of the sense of elegance the wedding brought in North Carolina’s Alamance County a 45 minute ride from the Raleigh/Durham airport.

The air trip of nearly 1,000 miles from small State College Airport to Delta’s hub at Detroit, to Raleigh/Durham was difficult.

I do not want to dwell on the difficulties involved in a paraplegic traveling by air from the small regional airport University Park Airport.

The reality is that through the diligent efforts of the splendid personnel at the airport under the effective leadership of James Meyer the airport made it possible for me to attend my daughter Joanna’s wedding and give her away.

I recognize the planes must be small, that the aisle chair is a necessity, and that I cannot bring with me heavy durable medical equipment, but the Amigo Travel Scooter is light enough to fly with me.

The security issues require people with disabilities such as I to present ourselves an hour earlier than everyone else because the security for disabled people in wheelchairs is significantly tighter than for able individuals.

Sadly, security issues are a federal matter. Indeed, Rep. Issa is currently looking into this.

There are many ways in which all of us can help improve University Park Airport. The term “improvement” is not meant to criticize.

James Meyer and his excellent staff are running a very user-friendly airport.

The individuals who work for the airlines went out of their way for me. I flew Delta and I could not be happier about the quality of service to me as someone who is wheel chair bound.

Our airport is excellent. We need to spend more time at the airport and learn to understand it and appreciate it. Without our airport we could not obtain many of the items State College residents so clearly want and go to restaurants etc. to obtain. There is even an Irving’s at the airport.

I am currently way behind in my work producing two academic papers. Academic writing is difficult to sustain for long periods of time and so I digress by….

Fortunately, tomorrow, Sunday Sonali and I will talk about the Bowers Project Paper and soon we will deliver it. Praise, the Lord.

My health is of less and less of concern. I am appreciative of the fact that I survived the jaws of death. There are times I think twice about my ability to recover from major surgery. I go through periods of considerable pain. Dr. Russo’s nurse and my physician both agree I am doing fine and instruct me to have patience that the recovery will arrive, but slowly.

I still feel 25 most of the time.
I still raise a little cain with the boys.
Honky Tonks and pretty women,
But Lord I’m still right there with ’em
Singing above the crowd and the noise…

[CHORUS]
Sometimes I feel like Jesse James
Still tryin’ to make a name.
Knowing nothing’s gonna change what I am.
I was a young troubador
When I wrote in on a song.
And I’ll be an old troubador when I’m gone…

Well the truth about a mirror…
Is that a damn old mirror…
Don’t really tell the whole truth.
It don’t show what’s deep inside.
Or read between the lines.
And it’s really no reflextion of my youth…

[CHORUS]
Sometimes I feel like Jesse James
Still tryin’ to make a name.
Knowing nothing’s gonna change what I am.
I was a young troubador
When I wrote in on a song.
I’ll be an old troubador when I’m gone…