You are here: Home / "What's past is prologue." / Today is Bloomsday 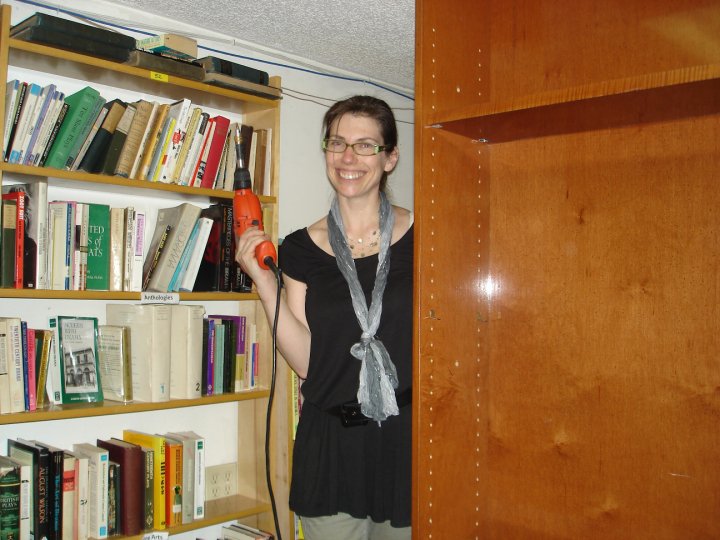 State College, PA, June 16, 2012, across Beaver Avenue from Webster’s Bookstore and Café where next year [not in Jerusalem, but at Webster’s] Bloomsday http://en.wikipedia.org/wiki/Bloomsday
will be celebrated properly]:

“Stately, plump Buck Mulligan came from the stairhead, bearing a bowl of lather on which a mirror and a razor lay crossed.”

This is the first sentence of Ulysses, James Joyce’s novel, first published in 1922 and for 15 years banned in the United States as obscene.

The Committee on College Reading, endorsed by the National Council of Teachers of English and the American Library Association, recommends Ulysses as one of the 100 most significant books in the world.

Depending on the size of the print, as many as 1,000 pages are being read out loud today, including here in Pennsylvania where Philadelphia’s Rosenbach Museum and Library houses the famous first edition published in Paris by Shakespeare & Company.

Today, say No to banning books; Yes to great literature; Yes again with Molly Bloom as she says in the last words of Ulysses, “…yes I said yes I will Yes.”

“Twenty years have passed,” writes the authoritative Joycean critic Stuart Gilbert in 1950, “since the appearance of the Study of Ulysses of which this is a new…edition…and among many notable events of these two decades one of the most interesting, from the literary point of view, was the lifting of the ban on the admission of Ulysses into the English-speaking counties. In the original Preface to my book I said: ‘In writing this commentary I have borne in mind the unusual circumstance that, though Ulysses is probably the most discussed literary work that has appeared in our time, the book itself is hardly more than a name to many….”

Consequently, in his discussion of the novel, which at one time was so hard to obtain that New York University’s smuggled copy was chained to a table in the main library lest it be stolen, Gilbert provides extensive quotations. In the last chapter entitled Penelope, the name Homer gave to Ulysses’ famously loyal wife, Gilbert discusses Molly Bloom’s soliloquy that ends the novel.

Gilbert writes,” [T]he force of this long, unpunctuated meditation, in which a drowsy woman’s vagrant thoughts are transferred in all their named candour of self-revelation on to the written record, lies precisely in its universality….”

Gilbert continues, “The concluding pages, a passage of vivid lyrical beauty…are at once intensely personal and symbolic of the divine love of Nature for her children, a springsong of the Earth; it is significant for those who see Joyce’s philosophy, nothing beyond a blank pessimism, an evangel of denial that Ulysses ends on…a paen of affirmation.”

Gilbert then quotes Joyce’s Molly Bloom saying to herself:
I love flowers Id love to have the whole place swimming in roses God of heaven theres nothing like nature the wild mountains then the sea and the waves rushing them the beautiful country with fields of oats and wheat and all kinds of things and all the fine cattle going about that would do your heart good to see rivers and lakes and flowers all sorts of shapes and smells and colours springing up even out of the ditches primroses and violets nature it is as for them saying theres no God I wouldnt give a snap of my two fingers for all their learning….yes I said yes I will Yes.”

Listen now to  Marcella Riordan read the last 50 lines of Ulysses as your heart thumps with joy.

This surprisingly sexy, mind-opening book by my one-time editor Brenda Maddox is terrific.

[Aside, in 1984, my friend Jonathan Miller, as I was about to leave for China, told me he would publish an interview on the telecommunications plans of the Beijing Ministry of Posts and Telecommunications if I could somehow get an interview. Jonathan and Brenda were editing a joint D.C. Telecommunications Daily/London Economist publication. When the interview turned into a series of articles, Brenda was an excellent editor. At the time, Brenda was also working on this biography of Joyce’s wife, long regarded by distinguished Joyce scholars as an extremely dull woman. Jonathan had read the book proposal, envied the size of the advance (as did I), and marveled at Brenda’s ability to track down erotic letters between Nora and James Joyce. When I finally read Brenda’s book, she was able to open up Ulysses for me in a way that finally opened up the pleasure of reading the great novel which had previously seemed so intimidating. ]

This is how Amazon describes:

Publication Date: June 16, 2000
“In 1904, having known each other for only three months, a young woman named Nora Barnacle and a not yet famous writer named James Joyce left Ireland together for Europe — unwed. So began a deep and complex partnership, and eventually a marriage, which endured for thirty-seven years.
“This is the true story of Nora, the woman who, transformed by Joyce’s imagination, became Molly Bloom, arguably the most famous female character in twentieth-century literature. It is also the story of Ireland, a social history encapsulated in the vivid recreation of Joyce and his small Irish entourage abroad. Ultimately it is the portrait of a relationship — of Nora’s complicated, committed, and at times shocking relationship with a hardworking, hard-drinking genius and with his work.
“In NORA: THE REAL LIFE OF MOLLY BLOOM, the award-winning biographer Brenda Maddox has given us a powerful new lens through which to see both James Joyce and the woman who was in turn his inspiration and his salvation.”
++++

Molly is currently accepting email applications for the position of Director of 2013 Bloomsday at Webster’s at the following address:mo[email protected]

We are looking for a faculty member in the English Department at Penn State sufficiently familiar with the 18 episodes of Ulysses who will:

Next year, film lecturer Anne Triolo will be in charge of all video arrangements. You saw her win on Jeopardy, imagine what she will do in her own metier.

Until “met him pike hoses” (metempsychosis) [“Yes. Who’s he when he’s at home?”], watch this selection from the 1967  movie Ulysses:

Webster’s on the web:

Webster’s on the map: