You are here: Home / Disability and Elderly Issues / US Representative in Congress Val Demings, Democrat, Florida must be our next Vice President. Must be. 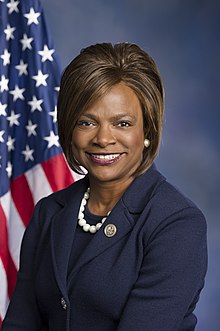 Demings: ‘I would be honored’ to serve as Biden’s vice president

Wikipedia: Valdez Venita Demings (née Butler; born March 12, 1957) is an American politician and retired law enforcement officer who serves as the United States Representative from Florida’s 10th congressional district, serving since 2017. She served as Chief of the Orlando Police Department, the first woman to hold the position. She was the Democratic nominee in both 2012 and 2016 to represent Florida’s 10th congressional district in the United States House of Representatives, the latter of which Demings won.[1] On January 15, 2020, Speaker Nancy Pelosi selected Demings to serve as an impeachment manager in the Senate trial of President Donald J. Trump. — https://en.wikipedia.org/wiki/Val_Demings

This is why we need her–need her now’!

Florida’s 10th congressional district is a congressional district in the U.S. state of Florida. It was reassigned in 2012, effective January 3, 2013, from the Gulf Coast to inland Central Florida. Before 2017, the district included parts of western Orange County, most of Lake County, as well as a northern section of Polk County. The current district is entirely within Orange County. It is situated along the I-4 corridor. Cities and towns that are encompassed by the 10th district include parts of Orlando, Apopka, Eatonville, Ocoee, Winter Garden and Windermere.[6][7] The district contains popular Orlando attractions like Walt Disney World, Universal Orlando Resort, and SeaWorld Orlando.

It is currently represented by Democrat Val Demings. Due to redistricting after the 2010 census, this district was re-numbered, and slightly reconfigured from the former 8th District. Prior to 2017, it was considered a swing district, albeit slightly Republican-leaning. Due to mid-decade redistricting that occurred in 2016, the seat is considered solidly Democratic. — https://en.m.wikipedia.org/wiki/Florida%27s_10th_congressional_district