You are here: Home / Disability and Elderly Issues / What’s the fuss? [Grilled 101]

I originally created this blog as a convenient way for readers to have access to my monthly column in Voices of Central Pennsylvania, published from October 2009 to February 2011. While recovering from minor cardiac surgery where the medical standard of “do no harm” was once again violated, I decided to quit my column rather than continue to be a person unable to change Medicare and thus always angry all the time. I wanted to love.

I am a frequenter of hospitals for pneumonia, rehabilitation to a right shoulder that cannot be repaired, diabetes, etc.–invariably released by Medicare dictate before it is necessary; frequently saved by homecare agencies now foolishly required to reduce their services.

In writing my column for February (the one below that begins with bull riding), I opted to reject anger.
Similarly, the once favorable economic conditions in downtown State College, PA where I live had given me the hope that government favorable to the disabled and elderly might provide us with the infrastructure, training, and understanding required to develop and benefit from the talent of those of us who are broken in body but sound in mind.

So, I gave up the column to work with engineers, architects, and designers who are planning a future that follows the Americans with Disabilities Act (ADA) and where segregation of the sort I experience daily at Ye Olde College Diner and the like (whose lack of access is grandfathered ) does not exist.

What does exist is that I continue to live an independent life. I cannot get from my bed to the bathroom without a scooter or other mobility device. Yes, there is a point where reality requires that I cannot engage in submission, cheerful or otherwise.

I must have access to mobility devices. President Obama, for whom I worked and voted, should be ashamed of himself for not only tolerating, but personally advocating a competitive bidding program for durable medical equipment.

This plan, which the President inherited from President Bush (who used it as part of an effort to gut Medicare) is already, in Pittsburgh and other locations, so altering the process of providing medical supplies such as oxygen, wheelchairs, power chairs, scooters and other mobility devices that local suppliers, such as the three here in State College, would only be able to serve the rich.

The rest of us are or would be at the mercy of often out-of-state suppliers of dubious reputation who would take their sweet time providing batteries and maintenance, resulting in people like me falling and going into assisted living facilities. Thus savings in Part B of Medicare would result in large costs in Part A.

Last year’s measure to end competitive bidding received the bipartisan support of so many members of the House that if the Democratic leadership had called it up for a vote it would have passed. The Senate followed the lead of Senator Robert Casey, Jr. (D-PA) and no member of the Democratically-controlled senate endorsed the legislation.

While Sen. Casey publicly dithered about his position on the subject, his real position appeared to become clear. Sen. Casey is reportedly a friend of the President. The President, for reasons of his own, an informed source told me, personally believes in competitive bidding. Sen. Casey is not going to take a position that would make his friend angry.

Two columns below express the views of Rep. Jim Langevin, a liberal Democrat from Rhode Island, and Rep. Glenn Thompson, a conservative Republican who represent me here in the Fifth Congressional District of Pennsylvania, expressing their opposition to competitive bidding. Their specific advocacy was to the legislation introduced last year, but this year’s legislation is déjà vu all over again.

My fixation on competitive bidding has made me a source of jest and some mistrust. My support of Rep. Thompson, especially, has made some Democrats suspect my loyalty to the party. 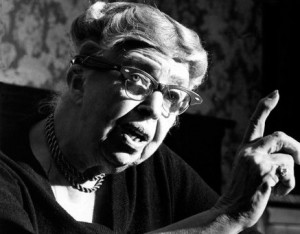 I am a loyal Democrat who believes in the party of Eleanor Roosevelt and Adlai Stevenson. I have no trouble picturing Eleanor Roosevelt shaking her trademark index finger at President Obama and Senator Casey. If they want my vote, they had better start acting like Democrats. Democrats don’t treat people who cannot walk in a way that causes us to feel like cripples.

I will pray that you find your way back to the ideals of the Democratic party.